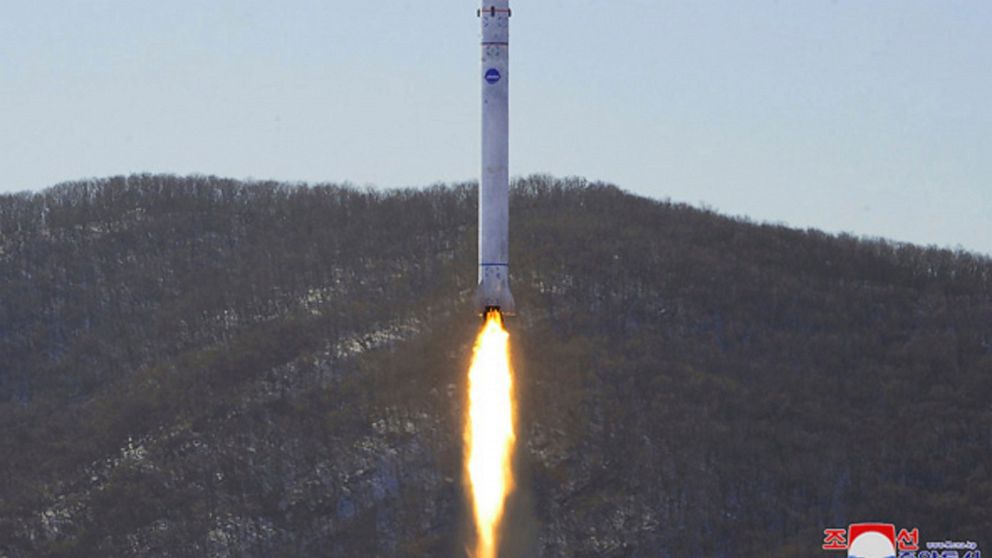 SEOUL, South Korea — North Korea said Monday it fired a test satellite in an important final-stage test for the development of its first spy satellite, a key military capability coveted by its leader Kim Jong Un along with other high-tech weapons systems.

The North’s official Korean Central News Agency also released black-and-white photos showing a space view of the South Korean capital and Incheon, a city just west of Seoul, in an apparent attempt to show the North is pushing to monitor its rival with its advancing technologies.

The rocket carrying the test satellite was launched Sunday to assess the satellite’s photography and data transmission systems, KCNA said.

“From the images released, the resolution does not appear to be so impressive for military reconnaissance,” Soo Kim, a security analyst at the California-based RAND Corporation, said. “I’d note, however, that this is probably an ongoing development, so we may see more improvements to North Korea’s military reconnaissance capabilities over time.”

South Korea, Japan and U.S. authorities had said Sunday they had detected a pair of ballistic missile launches by North Korea from its northwestern Tongchang-ri area, where the North’s satellite launch pad is located. They said the two missiles flew about 500 kilometers (310 miles) at a maximum altitude of 550 kilometers (340 miles) before landing in the waters between the Korean Peninsula and Japan. This could mean North Korea might have fired a missile or two to send the test-piece satellite into space.

A spy satellite was on a wish list of sophisticated military assets Kim announced during a ruling party meeting early last year, together with multi-warhead missiles, solid-fueled long-range missiles, underwater-launched nuclear missiles and nuclear-powered submarines. Kim has called for such high-tech weapons systems and an expanded nuclear arsenal to pressure the United States to abandon its hostile polices on North Korea, an apparent reference to U.S.-led sanctions and the U.S.-South Korean military drills that North Korea views as an invasion rehearsal.

North Korea has since taken steps to develop such weapons systems. In February and March, North Korea said it conducted tests to check a camera and data transmission systems to be used on a spy satellite. In November, it test-launched its developmental, longest-range Hwasong-17 intercontinental ballistic missile, a weapon believed to be designed to carry multiple warheads. Last week, North Korea said it performed a “high-thrust solid-fuel motor” to be used for a new strategic weapon, an apparent reference to a solid-fueled ICBM.

Ankit Panda, an expert with the Carnegie Endowment for International Peace, said that North Korea will likely make a proper orbital launch for a reconnaissance satellite next April — probably around April 15, the birthday of Kim’s late grandfather and state founder Kim Il Sung. The day is one of the most important state anniversaries in North Korea.

Earlier this year, North Korea test-launched a record number of missiles, many of them nuclear-capable missiles with varying ranges to reach the U.S. mainland and its allies South Korea and Japan. It also legislated a law authorizing the preemptive use of nuclear weapons on a broad range of scenarios, causing security jitters in South Korea and elsewhere.

“Having codified his country’s nuclear law earlier this year, tested missiles of varying capabilities, and made it very clear he has no interest in diplomacy with the U.S. and South Korea, Kim has essentially paved the way for nuclearization,” Soo Kim, the analyst, said. “He’s lent the appearance that the only possible way out of this quagmire is for the international community to fold the conditions set forth by the regime.”

She said a handful of other high-priority geopolitical concerns involving China and Russia “has allowed Kim to buy time and the grace of the international community to push forward with his plan.”