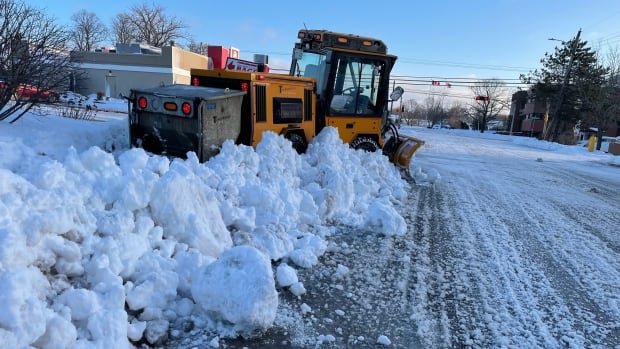 P.E.I. is still feeling the impact of a winter storm that hit the province on Monday.

Wind warnings have been lifted for Queens and Prince counties, but it is expected to remain breezy throughout the day. Kings County remains under a wind warning.

Public schools have cancelled classes. Provincial civil service offices are delaying opening, as are UPEI, Holland College and many businesses as the province tries to clean up after the storm.

Snow and rain left behind a slushy mess on Monday. The weather turned colder overnight and the rain turned back to snow. There was significant snowfall in some areas overnight, but that is mostly done with only a few more flurries expected.

“It’s not what’s falling that’s the problem. It will be quite sunny today,” said CBC meteorologist Jay Scotland.

“The snow that fell last night, with the temperatures easing back below the freezing mark, is a little lighter and fluffier than what we saw yesterday, blowing snow, reduced visibility, that would be the big concern.”

Snowfall warnings were all lifted by 6 a.m. and wind warnings began to drop a couple of hours later. Wind gusts of 50 to 60 km/h are forecast to continue until the late evening.

Overnight Monday as many as 6,000 Maritime Electric customers were without power, but by 6 a.m. all but a few had been restored.

The winds overnight have made cleaning up difficult. Sanding and salting were not possible, and visibility was poor for plow drivers, say dispatchers.

With winds easing a little before 6 a.m. plows are starting to work some secondary roads.

The Prince County dispatcher said there is still a lot of snow to move with icy sections and drifting snow. In Kings County, the dispatcher said visibility remains poor.