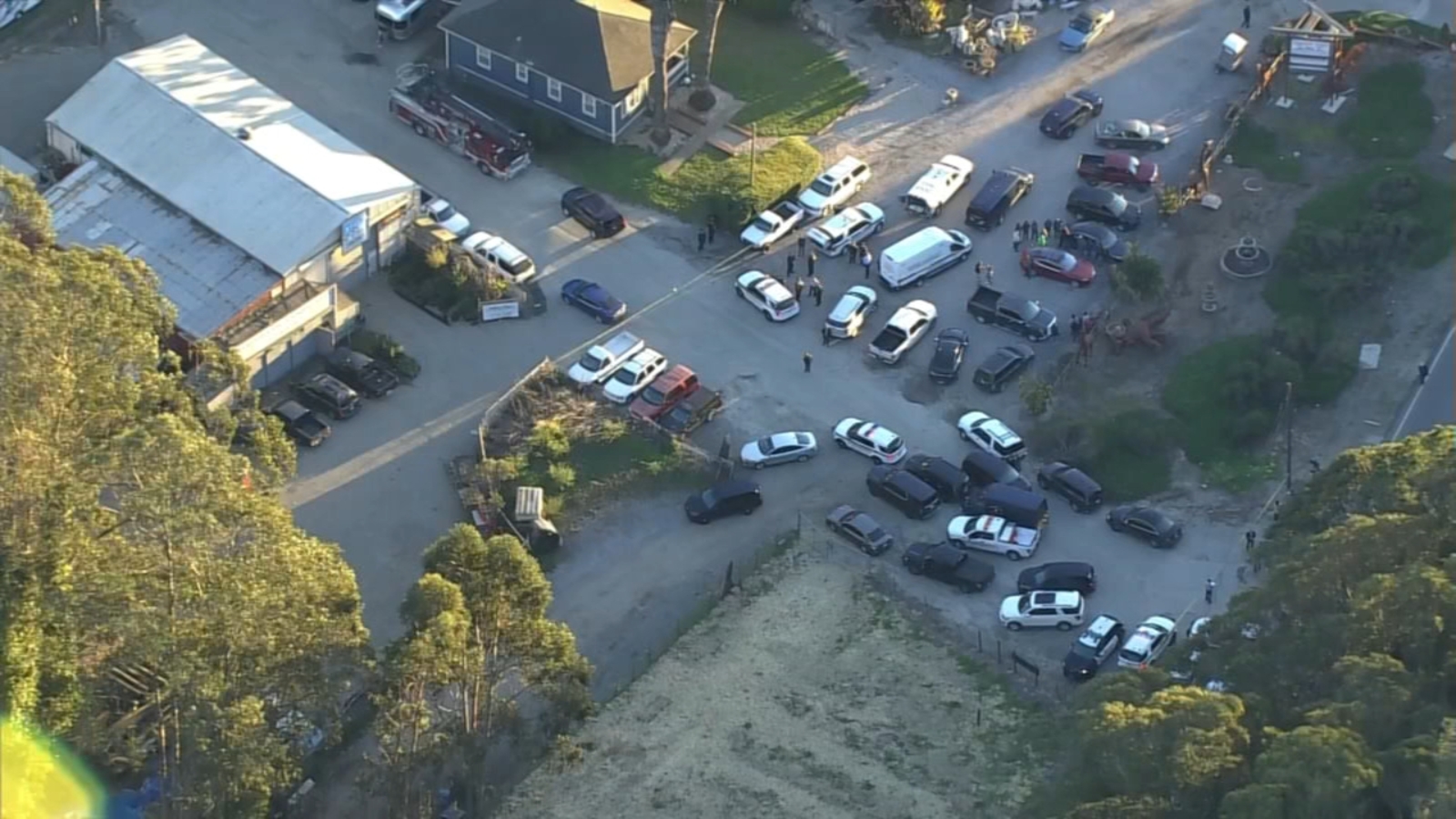 HALF MOON BAY, Calif. (KGO) — Officials Tuesday morning said that the mass shooting at two mushroom farms in Half Moon Bay that killed seven people, and injured one was likely workplace violence.

The San Mateo County Sheriff along with the District Attorney held a news conference where they said that it still is unclear what specifically led to the shooting.

They are still working to identify victims, but say that there are seven men and one woman and all are of Asian and Hispanic descent.

The coroner is notifying family, which has been difficult because some of the victims are migrants.

Chunli Zhao, 67, of Half Moon Bay, was arrested in connection to the incidents and taken into custody Monday.

Zhao worked at one of the mushroom farms and investigators belive it was workplace violence. However, it is still unclear what Zhao’s connection to the victims was beyond being co-workers.

San Mateo Co Sheriff Christina Corpus says that he was using a semi automatic gun that was legally bought and owned.

Zhao is scheduled to make his first appearance in court tomorrow, but charges have not formally been announced.

He was not known to police before the shooting.

The District Attorney says that this is the largest number of victims in a mass shooting that San Mateo county has ever had.

The text below is from a previous report

The shootings were reported at Mountain Mushroom Farm on San Mateo Road near Highway 1 and Concord Farms off Cabrillo Hwy S. First responders first received a call about an active shooter at around 2:20 p.m.

Then shortly after at the Concord Farms on the 2100 block of Cabrillo Highway South – less than 3 miles away from the Mountain Mushroom Farm – three additional victims were located, also deceased with gunshot wounds.

RELATED: What to know about the victims killed in the Half Moon Bay mushroom farms mass shooting

The suspect has been taken into custody, the San Mateo County Sheriff’s Office confirmed.

Chunli Zhao, 67, of Half Moon Bay, has been arrested in connection to the incidents.

The sheriff’s office says a weapon was located in Zhao’s vehicle. He is believed to have acted alone and there is no further threat to the community, they added.

“This is a devastating tragedy for this community and the many families touched by this unspeakable act of violence,” said San Mateo County Sheriff Christina Corpus.

A source tells ABC7 News the suspect worked at one of the mushroom farms, and all the victims were coworkers.

MORE: There have been more mass shootings in US than days in 2023, database shows

Throughout the evening, families of victims arrived at the scene, attempted to piece together what answers they could.

“…not concerned about anything else, just hoping to see him come out, because I really don’t want to…” said Carlos Martinez-Maya.

Carlos Martinez-Maya spoke with us at around 5 p.m. Monday, about his uncle who was working at the mushroom farm along Cabrillo Highway.

Then at 7 p.m., he told us workers from the farm confirmed to the family that his uncle was one of the people shot and killed at this scene.

Martinez-Maya is identifying his uncle as a man named Marciano Martinez-Jimenez, who at work was known as “Martin.” Understandably, the family has asked for some time while they process all that has happened.

Locals tell us Mountain Mushroom Farm is known to be a marijuana growing farm.

“This is a horrific event, one that we would never imagine would occur in San Mateo County,” said David Pine who is Board of Supervisors President.

“There were farmworkers affected tonight. There were children on the scene at the incident. This is a truly heartbreaking tragedy in our community,” said Supervisor Ray Mueller.

As to how many children witnessed this and what they saw:

“It’s a big rural location so people are working, it’s spread out, there’s people that live at the location as well. So it was the afternoon, kids were out of school and for children to witness, this is unspeakable,” said Sheriff Christina Corpus.

Authorities give update on Half Moon Bay shooting that killed 7, injured 1

Kate Shea and Lizette Diaz are Half Moon Bay residents and both have been volunteering in the city to help those impacted by the massive flooding from January’s torrential rain.

Then came the Monday’s mass shooting in their city.

“I walked into my boss’ office at 4 p.m. and I said, ‘There are four people dead in my town, I have to go,'” says Shea. “The farm workers on the coast have a rough life as it is, and this is just terrible.”

Both Diaz and Shea have been assisting families at a community shelter set up at Portuguese Hall in Half Moon Bay.

A lot of ranch workers and their families have been displaced since the farms where they work are now crime scenes. Some were already staying in hotels because their homes were damaged in the storm.

“There is a lot of sadness, there is grief,” says Diaz. “It affects me because I have four boys, and I cannot imagine what those kids witness today.”

Alejandro Lopez knew one of the victims – a man he called a brother, a friend he has known for 30 years. Lopez brought his family to the shelter to meet the victim’s family.

John Williams and his wife dropped off blankets. He says the community still hasn’t recovered from the aftermath of the rain and flooding. “What next, you know? Everything is getting thrown at us,” he says.

Williams says he does, however, feel more safe knowing that suspect was arrested.

“Totally shocking you hear about this on the news all the time. But when you hear about it, when it comes home to you like, in a small town like this, it really does bring it home. It is just deplorable,” says Williams.

She is another local resident who came to the shelter to help out the families. She is also happy the suspect was arrested. She now wants answers.

“One thing that I am happy about is that (the suspect) is alive, so hopefully we get to get some answers,” says Prentice. “I don’t know how open this person is to talking and explain the ‘why.’ I am assuming there is some vendetta.”

The volunteers says many of these families could be here for the next few days.

The local group ALAS is aiding with donations.

ABC7 was told the Holy Family Children’s Center went on lockdown around 3:20 p.m.

A family reunification center has been set up at the IDES Hall on 735 Main Street.

With the little information that is available to us at the moment, our comments are limited. For certain, we thank the outpouring of thoughts and support from the community. We thank law enforcement for their swift response and actions. Concord Farms is a family owned and operated mushroom farm at this location for 37 years. With no past knowledge with this gunman or his motives, we are shook and very eager to gain more information from the authorities and their investigations. Our hearts are with the victims, their families and the Chinese American community, from Half Moon Bay to Monterey Park.

“My colleagues and I on the Half Moon Bay City Council are appalled and saddened at this terrible incident, which has completely shocked our community. Our deepest sympathies are with the families and individuals who have been devastated by this horrendous act. We share in their pain and know that our community members are also keeping the victims and their families in their hearts. Now more than ever it’s important for the community to come together and be there for one another.”

Congresswoman Anna Eshoo released the following statement after the shootings in her congressional district in Half Moon Bay:

“I continue to monitor the unfolding tragedy that has taken place in Half Moon Bay. My gratitude to the San Mateo Sheriff’s Office who took the suspect into custody and are working the two scenes of the murders. “Half Moon Bay is a beloved and tight-knit community, and we all stand with them and the families of the victims during this dark hour.”

President Biden released a statement on the shooting, happening just one day after the deadly mass shooting at Monterey Park in Southern California, saying in part:

“Jill and I are praying for those killed and injured in the latest tragic shooting in Half Moon Bay, California. For the second time in recent days, California communities are mourning the loss of loved ones in a senseless act of gun violence. Following a briefing from my homeland security team, I have directed my administration to ensure local authorities and the broader Half Moon Bay community have the full support of the federal government in the wake of this heinous attack.”

“At the hospital meeting with victims of a mass shooting when I get pulled away to be briefed about another shooting. This time in Half Moon Bay. Tragedy upon tragedy,” Newsom tweeted.

Anyone with information about this incident is encouraged to contact Detective Deschler at 1-800-547-2700.

Get the latest on the deadly Half Moon Bay shootings here.

If you’re on the ABC7 News app, click here to watch live