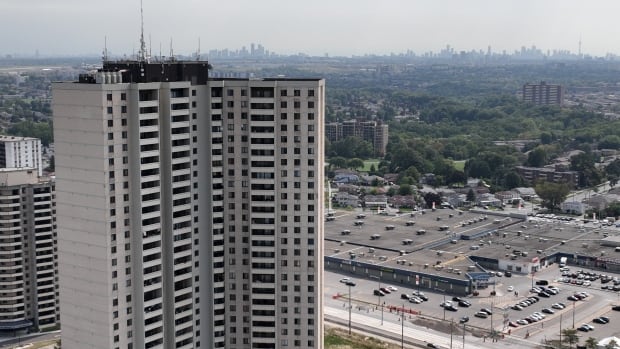 Paula Torres’s landlord asked her to top-up her rental deposit, but the Mississauga renter has no intention of doing so.

For 27 years, Torres has lived in a two-bedroom apartment with her family and says she’s never received a dime in interest on her rental deposit — commonly referred to as last month’s rent.

All Ontario renters are entitled to receive interest on those deposits or have a landlord put that interest toward any top-ups requested as rents climb.

But some Ontario landlords are sitting on thousands of dollars of interest accrued from rental deposits and have stopped paying out interest together, according to the Federation of Metro Tenants’ Association. In some cases, they also asking renters to fork over cash as often as every year in a process some advocates are calling “double-dipping.”

“They are sucking the bone marrow of the tenants,” said Torres.

With the current average rent for a one-bedroom unit in Toronto sitting at $2,532, those who moved in in 2022 could be entitled to $63 in interest next year.

Newcomers may not know rights

While for many in Torres’s building, the top-up requested is just $35, for low-income newcomers or seniors who may be relying on food banks to get by, it’s just one more cost on top of regular rent increases, she says.

“If you look at the paper, you have to be a CPA accountant to understand what the heck they did there,” said Torres. “They get very scared.”

Since many newcomers or those with weaker English often don’t know their rights as tenants, some just pay the fees they’re told are owed, she says.

Advocates and lawyers say it’s not unusual for renters to be asked for a top-up while a landlord holds onto the interest their deposits have earned. It’s also not uncommon that renters never receive owed interest, even years after moving out.

That’s why many say more work is needed to help tenants know their rights.

Interest should be used for any top-ups: lawyer

Douglas Kwan, the director of advocacy and legal services with the Advocacy Centre for Tenants Ontario, says tenants need to be aware that it is legal for landlords to want a rental deposit topped up, but how they go about this process matters.

The right for a landlord to use tenant interest payments for a rent top-up exists in legislation, so “they shouldn’t be asking for money from tenants.

“It’s inappropriate,” he said, adding doing so when a tenant has never received interest payments is “almost a situation where they’re double-dipping.”

The top-up amounts also must be limited to the current rental rate, he says.

Unless interest has been paid out to tenants, he said in most cases, “there shouldn’t be any money transferred over to the landlords.”

Kwan says he is concerned about multiple letters he has seen from landlords telling tenants they owe money for a rental top-up, calling such them “misleading.”

He encourages tenants who receive such letters to consult one of Ontario’s free legal clinics.

Ontario’s NDP Housing Critic Jessica Bell says many renters’ basic rights are being “violated” because a lack of enforcement of the Residential Tenancies Act.

She says that’s partly because the government has underfunded the province’s Rental Housing Enforcement Unit, making it an inefficient and ineffective body for renters to turn to.

“A renter should be able to pick up the phone or send an email to a bylaw officer and the officer should then approach the landlord and say this needs to be fixed or there are consequences,” she said. “That’s not happening.”

Asked to respond to the criticism, a spokesperson for the Ministry of Municipal Affairs and Housing said the government recently implemented stronger protections for tenants who have been evicted in bad faith.

Landlord’s Self-help, a non-profit organization for landlords based in downtown Toronto, interpreted the rules no differently than Kwan.

“If there are any landlords not following this, it may be due to their ignorance of the law,” said Diana Padierna, a community legal worker with Landlord’s Self-Help.

But advocates and tenants aren’t convinced ignorance is the reason for the demands.

Torres says she sees the situation as simpy taking advantage of those who don’t know better.