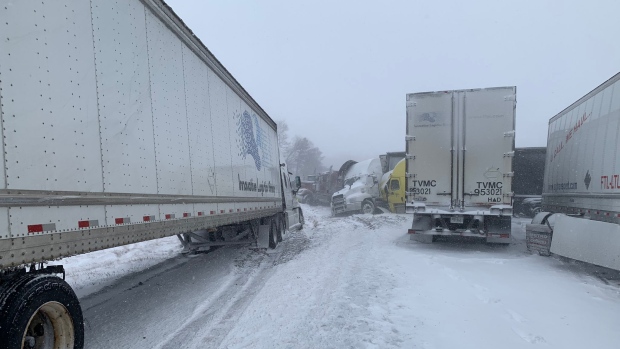 An extended rainfall across the Greater Toronto Area is turning into a nasty winter storm making for icy conditions on the road and strong snowy winds in the sky.

A winter storm warning is in effect for the city as Toronto Mayor John Tory warns it could take days to clear the up to 15 centimetres of snow left in its wake.

Here’s a live look at how the weather system is passing through the region and the problems it’s causing for commuters and travellers alike.

2:45 P.M. – Canada Post has issued red and yellow delivery service alerts for every province and territory in response to the storm.

“We will do our best to process and delivery today, but it may not be possible in some regions and may be delayed in others. Although recovery efforts are underway to get some delivery on December 24 where warranted, these efforts will be pending weather and road conditions as we prioritize the safety of our employees,” the mail carrier said in a news release Friday afternoon.

2:30 P.M – The OPP says no serious injuries have been associated with any of the multi-vehicle collisions along the 401/402 corridor. Two people were transported to the hospital with non-life-threatening injuries.

The City of Mississauga says priority route salting is ongoing while secondary routes, bus stops, and priority sidewalk routes have been completed at least once, with some re-runs on some routes.

The City of Vaughan announced that all city facilities are closing early today in response to the storm. All Vaughan Public Libraries closed at 1 p.m. City Hall, the Joint Operations Centre and all community centres closed at 2 p.m.

1:00 P.M. – The City of Toronto says recreation centres, arenas, and conservatories are closed today. However, the Warming Centre at Mitchel Field will remain open and the Agincourt, John Innes and Regent Park Community Centre will remain open for respite.

The current wait time in the region is averaging 40 minutes.

12:00 P.M. – Ontario Provincial Police Sgt. Kerry Schmidt says that there are reports of more than 100 vehicles involved in multiple collisions along Highway 401 between Tilbury and Colonel Talbot Road west of London. He says that there are not yet any reports of serious injuries but that “officers are still trying to get to all of the involved vehicles.” All westbound lanes on Hwy. 401 are currently closed near London due to the collisions. Schmidt said that Highway 402 has also been fully closed in its “entirety” due to poor road conditions.

“It is just a big mess out there right now,” Schmidt told CP24. “I don’t have reports of any serious injuries but as officers are responding to crashes more crashes are happening behind them as vehicles plow into stopped traffic.”

11:30 A.M. – CP24 Meteorologist Bill Coulter says that temperature that began the day in the positives are continuing to plunge and are now creating flash-freeze conditions in parts of the GTA. He says that while the storm will not be a “mega snow event” in Toronto, it will still create significant challenges due to the potential for blowing snow and sub-zero conditions. Drivers, he said, should stay off the roads until at least mid-day Saturday if they can.

“When I came in this morning it was 4 C, then it was 1 C, then it was -3 C and now it is – 6 C. If you give it a few hours we will be at – 9 C, feeling like the minus high teens. The wind gusts will also continue to accelerate with gusts of 90 and maybe even 100 kilometres an hour. This is a potent storm system, we are just not in the sweet spot for snow,” Coulter said.

10:45 A.M. – Porter Airlines says “many” Ontario-based flights will likely be cancelled this afternoon due to the weather.

“We are planning to ensure we are in a strong position to operate tomorrow and get as many passengers to their destinations as possible,” the downtown Toronto-based airport said in a tweet.

Porter said complimentary moves are available for any flight scheduled today or tomorrow and can be made on their website.

10:30 A.M. – The GTAA says that just over 30 per cent of all flights flying in and out of Toronto have been cancelled.

10:00 A. M. – Blizzard warnings have been issued for a swath of southern Ontario, where Environment Canada says that “crippling” conditions are possible. It says that 25 to 50 centimetres of snow could fall in the following communities.

9:00 A.M. – Temperatures are starting to drop and the cold air is quickly turning the lingering rain into snowfall in parts of the GTA.

“While it won’t be the most snow we’ve ever seen — five to 10 cm — it’s enough to create near zero visibility, whiteout conditions especially through the afternoon and evening,” he said.

He said that because of the overnight rain, crews were unable to treat roads with the salt normally laid before a winter storm such as this.

7:00 A.M. – Travellers at Pearson are being encouraged to check their flight status and follow the advice from their respective airlines before making the trip to the airport.

WestJet proactively cancelled all its flights at airports in or out of Ontario, as well as British Columbia, and Quebec on Thursday ahead of stormy weather.

Meanwhile, Air Canada has initiated a new “goodwill policy” that let’s customers cancel flights online to receive a full refund or voucher on tickets purchased on or before Dec. 21 for any flight between Dec. 22 and 26.

“Customers should utilize the online tools to obtain their refund, travel voucher, or to rebook. Please only go to the airport if you have a confirmed flight and the flight status shows it is operating,” the airline said in a tweet published Thursday night.