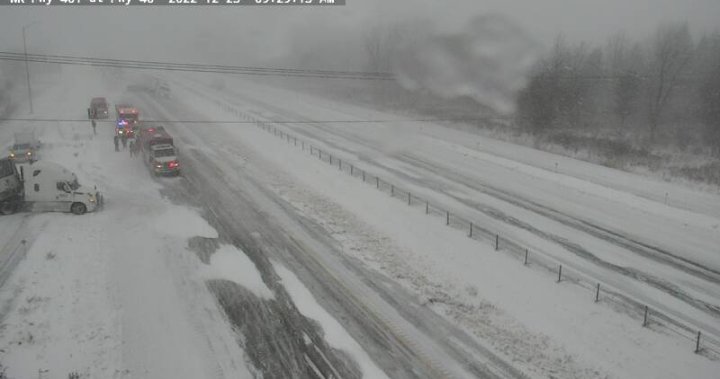 Highway 401 has been closed between London, Ont., and Tilbury, a town just west of Chatham-Kent, due to multiple collisions, according to OPP.

It’s one of several road closures onto the highways Friday morning as a major winter storm sweeps through southern Ontario.

Elgin County OPP confirmed in a Tweet that both eastbound and westbound lanes between Tilbury and Victoria Road in Ridgetown are closed due to a collision involving 12 vehicles.

#ElginOPP CK Detachment has closed both the E/B and W/B Lanes of the #HWY401 between Tilbury and Victoria, due to a collision involving 12 Vehicles. More updates when available. ^bp pic.twitter.com/Jlcn2Ipn70

No updates have been provided on the status of the collision.

Elsewhere, Highway 402 between Colonel Talbot Road and Highway 401 is also closed in both directions.

Highway 402 westbound near Mount Brydges is closed between Glendon Drive and Hickory Drive. Westbound 402 is also closed at Wonderland Road.

“Roads are less than ideal this morning,” wrote Const. Nick Williams, a technical collision investigator with Grey Bruce OPP, in an email. “We’re experiencing reduced to almost no visibility in spots.”

“Just got off the phone with that communication center Sergeant in London and OPP across southwestern Ontario are responding to hundreds of collisions right now,” said Const. Ed Sanchuk with Norfolk County OPP in a video posted to Twitter. “We’re just asking everyone, if you don’t need to travel during the course of this winter storm, please stay home where you’re going to be safe.”

Williams said that OPP are “encouraging those that are travelling to plan ahead and expect major delays, and to drive according to the road and weather conditions.”