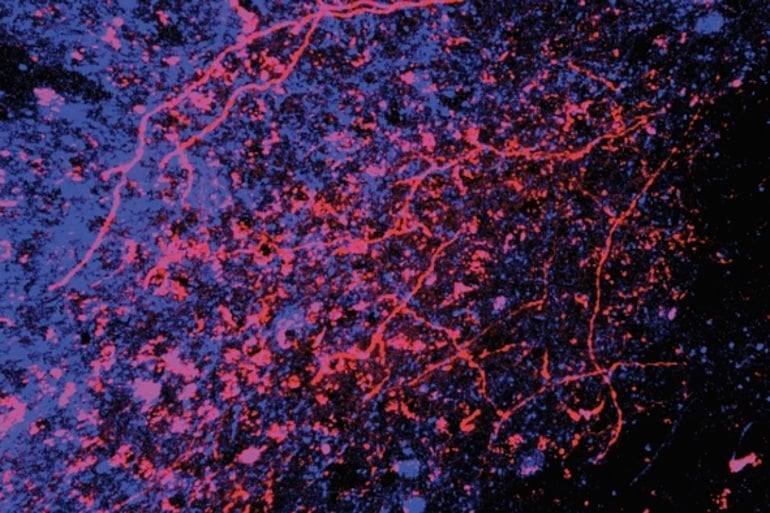 Summary: Study reveals a skin-to-brain neural circuit that responds to rewarding forms of social touch. Researchers say the findings could provide an avenue for harnessing the power of touch to assist in treating social and emotional disorders.

A parent’s reassuring touch. A friend’s warm hug. A lover’s enticing embrace. These are among the tactile joys in our lives.

Now, scientists at Columbia’s Zuckerman Institute and two partner institutions report previously unidentified starting points in the neurobiological pathways underlying pleasurable, sexual and otherwise rewarding social touch. Most notably in their mouse studies, they for the first time teased out a full pathway that begins with neurons in the skin that respond to gentle stroking and run all of the way to pleasure centers of the brain.

This research was published today in Cell.

The findings also point toward touch-based therapies for alleviating anxiety, stress and depression, the researchers said. What’s more, such therapies may hold promise for those with autism and other conditions that can make even tender touch unbearable.

“From the start, this project had high-risk/high-reward written all over it,” said Ishmail Abdus-Saboor, PhD, a Principal Investigator at Columbia’s Zuckerman Institute and corresponding author on the paper. “We just kept following the data to where it took us.”

Scientists have long known the skin features tactile sensory cells–key components of the peripheral nervous system–that enable us to discern different textures and temperatures, as well as varieties of pleasurable and painful mechanical stimuli.

“We weren’t sure this picture of social touch was quite right,” said Dr. Abdus-Saboor, who is also an assistant professor of biological sciences at Columbia. “We set out to test whether there might be tactile neurons specifically tuned for rewarding touch.”

There had been hints of this possibility from researchers at Caltech, who studied a class of sensory cells, dubbed Mrgprb4 cells after a receptor in their membranes. The scientists found these cells to be responsive to light strokes.

The new research in Cell is the culmination of a four-year trajectory of collaborative work involving nearly 20 scientists (12 from the Abdus-Saboor lab, including the first author) from three institutions to look far more closely at these cells.

Key to the study was a powerful technique called optogenetics in which individual cell types are engineered so they can be activated when researchers shine specific colors of light onto them. The technique is especially suited for teasing out the functions of specific populations of cells.

The researchers began their exploration in the fall of 2018 at the University of Pennsylvania, when Dr. Abdus-Saboor was a faculty member there studying the neuroscience of pain.

That’s when then graduate student Leah Elias and then lab technician William Foster (now a Columbia graduate student in the Neurobiology and Behavior program and first author on the Cell paper) made a startling observation.

“We saw that by activating this understudied population of tactile sensory cells in the mouse’s back that the animals would lower their backs and take on this posture of dorsiflexion,” said Dr. Elias. In the world of rodents, such a posture is a key signature of sexual receptivity, which normally requires the physical attentions of a suitor mouse.

“It was very strange. We didn’t know what to make of it,” said Dr. Elias, now a postdoctoral fellow at Johns Hopkins University in Baltimore.

At the heart of this intriguing lead was a line of mice the team genetically engineered so the animals’s Mrgprb4 touch-sensitive cells would fire when illuminated with blue light. These types of touch cells had not previously been linked to any specific social behavior, but when Dr. Elias and Foster activated these cells by shining blue light on the mice, the duo could hardly believe the dorsiflexion responses they were seeing.

High-speed video data of the behavior was unmistakable. And later, the research team, led by then graduate student Melanie Schaffler, observed these same mice voluntarily going to the same spot in the research chamber where the animals previously had been illuminated. That was an indication that the animals’ experienced the firing of Mrgprb4 sensory cells in their backs as rewarding.

“This was the first documented example that a specific behavior might be generated or supported by these Mrgprb4 neurons,” Dr. Abdus-Saboor said.

While the dorsiflexion was fascinating and pointed towards a potential role for these cells in detecting sexual touch, the researchers needed direct evidence that they mediated touch during natural social encounters.

But the pandemic intervened and slowed the pace of research. It became so difficult to move the research forward that by the middle of 2020, the team considered dropping the project altogether.

At the 11th hour, however, Dr. Elias, working with Isabella Succi, then a technician in the lab at Penn (now a grad student at Columbia in the Biological Sciences program), conducted a crucial experiment. Using genetic techniques, they eliminated the Mrgprb4 cells. This enabled the scientists to see if the absence of these cells in touch circuitry affected the mices’ sexual response to tactile stimulation.

“The sexual receptivity just plummeted,” Dr. Elias said. “We then knew for sure that these cells were important for social touch in natural encounters.”

Crisp as this result was, the new data led to a compelling but daunting research question: how do these peripheral cells link into downstream neural circuitry through the spinal cord and then more centrally into the brain?

Answering this question, Dr. Abdus-Saboor noted, required techniques outside of the lab’s wheelhouse, which was in the peripheral nervous system. Toward this end, Dr. Elias expressed an eagerness for the lab to embrace fiber photometry, a technique that would allow them to see reward neurons in the brain “light up” to pleasurable stimuli.

Over the next several months, and with crucial help from Succi, Dr. Elias was able to show that activating Mrgprb4 cells indeed caused neurons to fire in the nucleus accumbens, one of the brain’s known reward centers.

But a critical question remained: how did this signal get from the skin to the brain?

As the growing team took on this multi-faceted research in 2020, a Harvard-led study reported a telling piece of the pleasurable touch puzzle. In their studies of touch-involved spinal cord cells, designated as GPR83 cells, this research group traced neuron-to-neuron links in both directions: centrally into the brainstem and peripherally to the same class of Mrgprb4 cells that Dr. Abdus-Saboor’s team had shown to detect and relay rewarding touch stimuli.

“That gave us the handle that these GPR83 neurons are probably a conduit connecting the skin all of the way to the brain,” said Dr. Abdus-Saboor.

With additional experiments–in collaboration with the Rutgers University lab of Victoria Abraira, PhD–the team managed to track the skin-to-brain circuitry of touch further and in more detail than had been achieved previously.

One major finding is that the brainstem neurons the Harvard-led team studied linked to yet deeper locations in the brain, the ventral tegmental area as well as the nucleus accumbens. That was a pivotal connection to observe because both brain areas already were known to be associated with the experience of reward and pleasure.

Dr. Abdus-Saboor points out that people have sensory skin cells, called C-tactile afferents, which have some similarity with the Mrgprb4 cells in mice. Humans also have spinal cord and brain neurons that correspond to the touch circuitry that Dr. Abdus-Saboor’s team and neuroscientists have been uncovering.

These similarities open the way to potential biomedical applications, Dr. Elias said. It could become possible, for example, to develop peripherally targeted techniques for treating stress, anxiety or depression–whether through touch therapies or even novel drugs applied directly to the skin.

“A cardinal symptom for many people with autism is that they do not like to be touched,” Dr. Abdus-Saboor added. “This begs the question of whether the pathway we’ve identified could be altered so people can benefit from touch that should be rewarding rather than aversive.”

“The pandemic made us all acutely aware of how devastating the lack of social and physical contact can be,” Dr. Elias said.

“I think about the mental decline of the elderly in nursing homes who could not have typical contact with visitors. I think about how physical contact between parents and their newborns and young children is necessary for proper cognitive and social development. We don’t yet understand how these kinds of touch convey their benefits, whether acutely pleasurable or promoting long-term mental wellbeing. That’s why this work is so essential.”

About this sensory neuroscience research news

Pleasurable touch is paramount during social behavior, including sexual encounters. However, the identity and precise role of sensory neurons that transduce sexual touch remain unknown. A population of sensory neurons labeled by developmental expression of the G protein-coupled receptor Mrgprb4 detects mechanical stimulation in mice.

Here, we study the social relevance of Mrgprb4-lineage neurons and reveal that these neurons are required for sexual receptivity and sufficient to induce dopamine release in the brain.

Even in social isolation, optogenetic stimulation of Mrgprb4-lineage neurons through the back skin is sufficient to induce a conditioned place preference and a striking dorsiflexion resembling the lordotic copulatory posture.

In the absence of Mrgprb4-lineage neurons, female mice no longer find male mounts rewarding: sexual receptivity is supplanted by aggression and a coincident decline in dopamine release in the nucleus accumbens.

Together, these findings establish that Mrgprb4-lineage neurons initiate a skin-to-brain circuit encoding the rewarding quality of social touch.