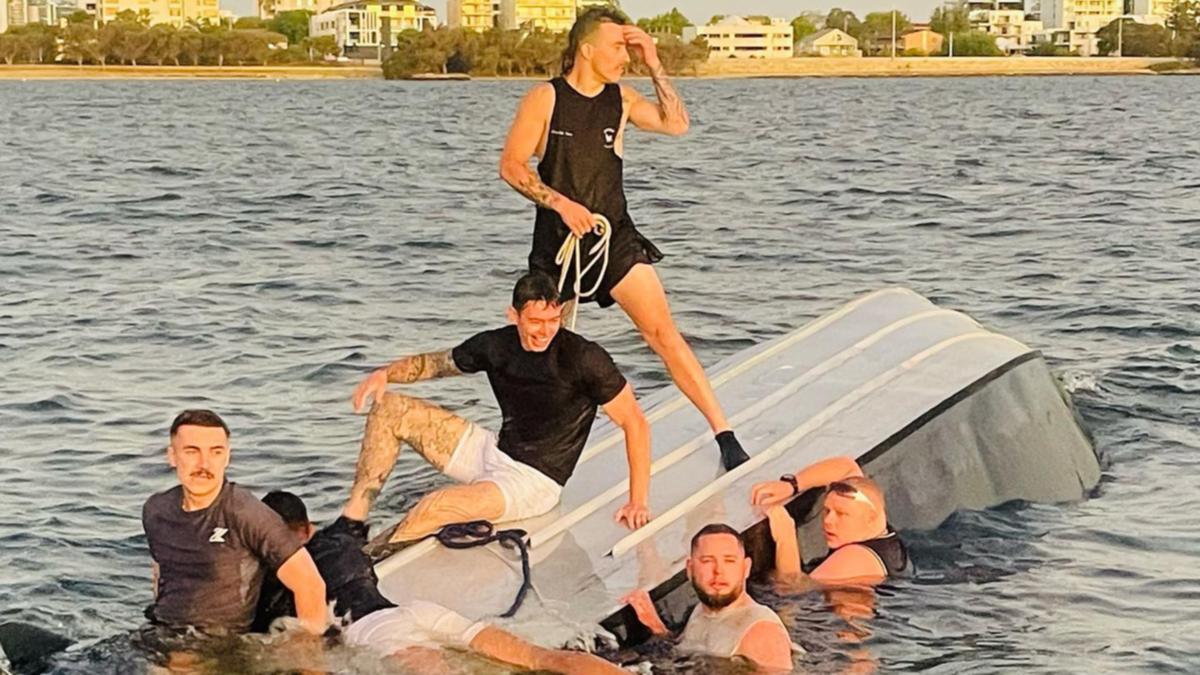 A weekend boat cruise along Perth’s Swan River ended abruptly for a group of young men when they decided to try and catch some air off another vessel’s wake.

Instead of the flawless landing they were hoping for, the boat capsized sending the six blokes into the river on Sunday afternoon.

It was hardly a surprise for Dave McDonald, the owner of Wild West Charters, who said the men were sitting on the boat’s hard top roof when they tried to jump his boat’s wake.

“These dudes just tried to jump my wake with six people on the hard top,” he wrote on Facebook.

“Their ‘raised centre of gravity’ donated all of their phones to the mighty Swan River.”

McDonald saw the whole thing play out and circled back to help the men out, saying he called Water Police and offered lifejackets while they waited for authorities to arrive.

“They went across my wake and the centre of gravity was too high and they just rolled over at full speed and into the river,” McDonald told 6PR on Monday morning.

“I tried throwing them a life jacket each, they were more concerned about saving their shoes and phones but I think they were in shock.”

Luckily, all of the men escaped without injury, aside from their bruised egos.

McDonald took to Facebook at the weekend to share the boys’ misfortune, posting a picture of the six guys, with four captured clinging to the sides of the boat, another scratching his head in disbelief and the last looking like he was having a good laugh about the situation.

Facebook users didn’t take too kindly to their boating misadventure, with one labelling it a “monumental f**k up”.

“Ladies and gentlemen, I present to you the future leaders of tomorrow,” another Facebook user wrote.

Although, not everyone was as hard on the boys.

“They’ll be laughing about their experiences in years to come,” another wrote. “We all do silly things at their age.”

While another joked, “I feel like this (picture) needs to be turned into a renaissance painting”.

One user summed up the accident simply as, “Boys will be boys”.