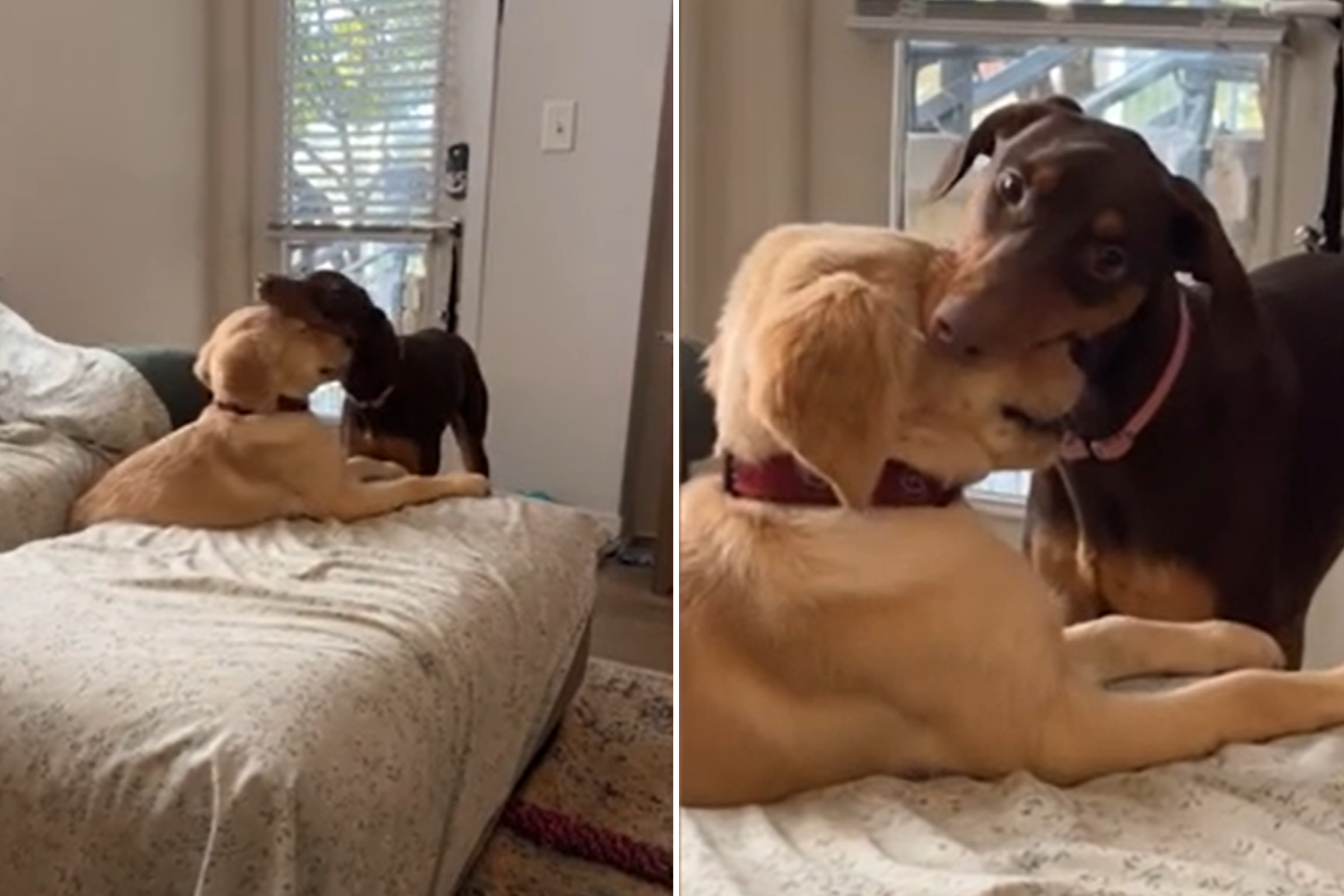 A TikTok video showing a Doberman trying to fit a golden retriever’s entire face in her mouth, much to the annoyance of the latter, has gone viral.

Travis told Newsweek: “They were chasing each other and running and jumping onto their favorite chair, but because of all the commotion, the ottoman slides apart from the chair, meaning one of them always gets stuck in the gap!

“After Penny got stuck, Mila walked up and started chewing on her head like she always does. I happened to be recording them and as soon as I noticed what was happening my reaction was, oh here we go again. Mila is always chewing on her friends, they let her do it as long as she’s not rough and some of them do it back.”

Biting and nipping is a common behavior trait among puppies as they explore the world with their mouths. VCA Animal Hospitals writes that it is generally “a form of social play” among puppies which isn’t problematic, although it’s necessary for the dog to learn the right context for using its teeth.

VCA Animal Hospitals continues that puppies should “learn to limit the force and strength of their bite,” which they often learn among their litter before going to new homes. As the puppy grows older and continues to use its teeth to explore, owners can provide toys for stimulation instead, such as tug-of-war toys to sink its teeth into.

Since Travis shared the video on TikTok on January 23, it has been viewed 3.3 million times and received 662,000 likes. The caption alongside the video reads: “Penny’s fault for being delicious.”

Travis explained that Mila is her dog, and Penny belongs to her neighbor, but they live in an apartment complex in Charlotte, North Carolina, so the dogs run to each other regularly to play.

Travis also spoke about Mila’s teething habit: “I try to teach Mila not to do that, which is why I was calling her name. They do this all of the time, every time I look over, somebody has their head in the other one’s mouth. They like to chew on each other, bite each other’s legs, play tug of war and wrestle around.”

Many TikTok viewers have loved seeing the dogs interact with each other, and with Travis laughing at how much Penny was “unbothered by it all.” Many people have also reached out to Travis to say their Doberman behaves in the same way, so it’s really not just Mila.

One TikTok user commented on the video saying: “Do golden retrievers even do anything? I’ve never seen one react badly to anything. They just exist.” Another commented: “Ok so it’s not just my brown Dobie who likes to do this to her other Dobie sister”.

Do you have funny and adorable videos or pictures of your pet you want to share? Send them to life@newsweek.com with some details about your best friend and they could appear in our Pet of the Week lineup.