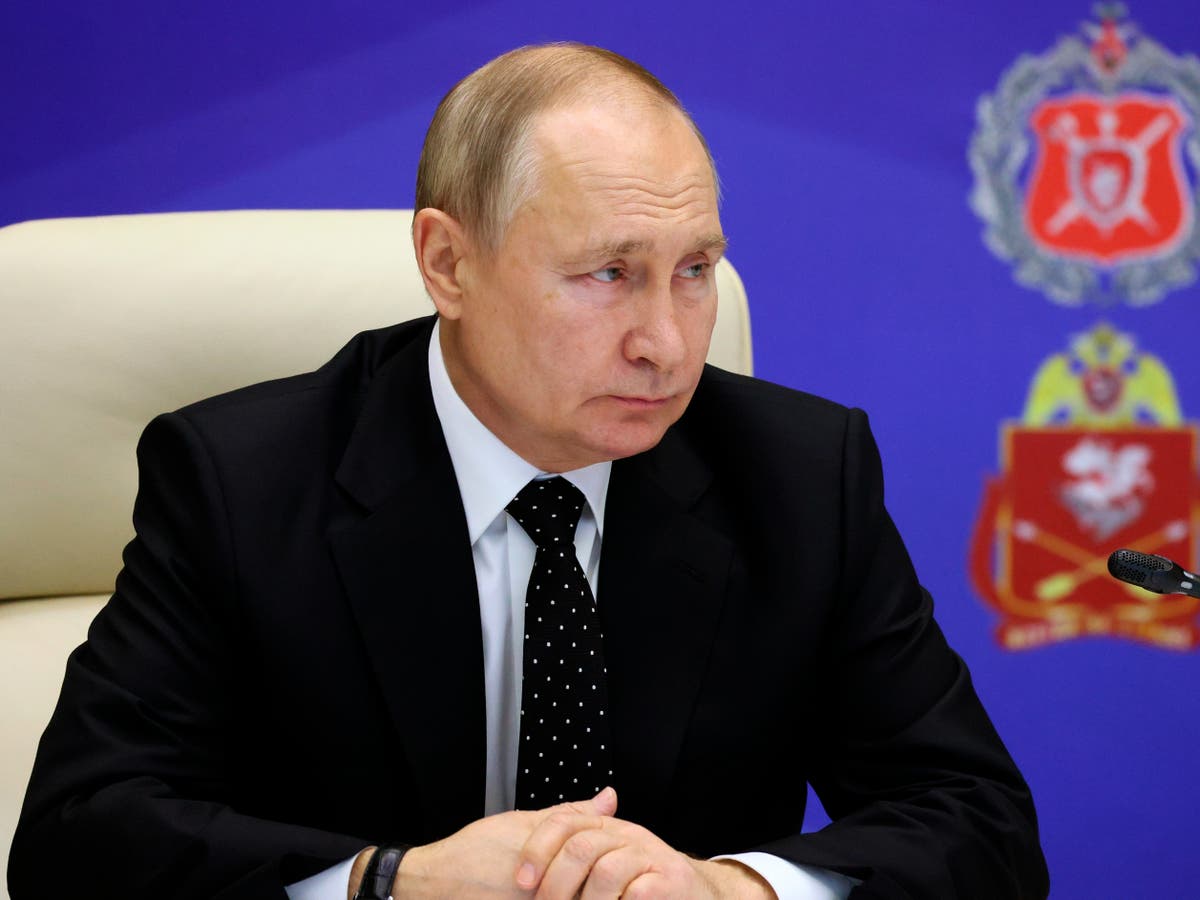 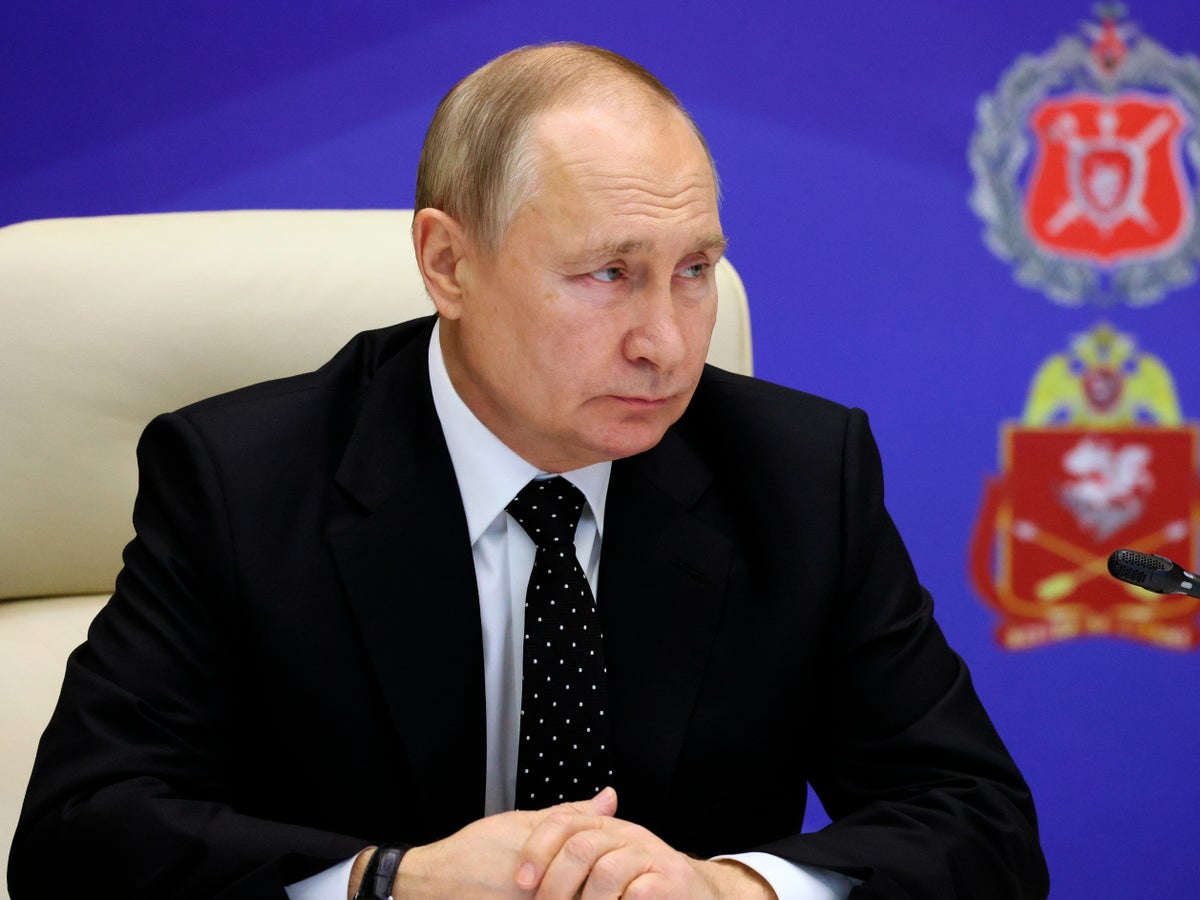 Vladimir Putin has attempted to deflect responsibility for his ailing war in Ukraine by staging a “choreographed” televised meeting with top Russian officials also involved in the invasion, the UK has suggested.

As his war grinds into its 10th month, with winter setting in, the Russian president visited what was reported by Russian media to be his Ukraine command headquarters last Friday, the location of which was not disclosed.

At the headquarters, Mr Putin invited proposals for the next steps of what he terms his “special military operation”, and his recently-appointed commander Sergei Surovikin was among those who presented a report, according to the British Ministry of Defence (MoD).

“In this choreographed meeting Putin likely intended to demonstrate collective responsibility for the special military operation,” the ministry said in its “intelligence update” on Tuesday.

The televised footage was also likely designed to dispel rumours spreading on social media that Mr Gerasimov had been fired, the MoD said.

The department’s chief, defence secretary Ben Wallace, gave a stark overview of Russia’s progress as he updated MPs on the 300th day of Mr Putin’s war.

Echoing recent suggestions by analysts and western officials, Mr Wallace told the House of Commons that some 100,000 Russian troops were “dead, injured or have deserted” since the invasion began, and claimed that “not one single operational commander then in place on 24 February is in charge now”.

“Russian capability has been severely hampered by the destruction of more than 4,500 armored and protected vehicles, as well as more than 140 helicopters and fixed wing aircraft,” the defence secretary said.

While Russia now controls some 18 per cent of internationally recognised areas of Ukraine, that includes parts of Donbas and Crimea seized prior to the invasion, and Kyiv has since reversed more than half of the gains made by Russia during Mr Putin’s war, according to the ministry.

Despite his attempt to illegally annexe Donetsk, Kherson, Luhansk and Zaporizhzhia in sham referenda, these four Ukrainian regions remain fiercely contested, and on Tuesday Ukraine’s president Volodymyr Zelensky met with troops in the city of Bakhmut, the scene of some of the most intense combat of the invasion so far.

Speaking as artillery rang out in the background of what he has termed “the hottest spot on the entire front line”, Mr Zelensky praised the “courage, resilience and strength” of Ukraine’s soldiers, and claimed to have passed through Sloviansk, Kramatorsk and Druzhkivka to reach the city.

“Bakhmut Fortress. Our people. Unconquered by the enemy. Who with their bravery prove that we will endure and will not give up what’s ours,” he wrote on Telegram.

“Since May, the occupiers have been trying to break our Bakhmut, but time goes by and Bakhmut is already breaking not only the Russian army, but also the Russian mercenaries who came to replace the wasted army of the occupiers,” he said, in a reference to mercenaries from the Wagner Group, who are reported to be leading the Russian offensive there.

Unverified footage on Russian social media appeared to show the group’s leader, Yevgeny Prigozhin, standing near a piece of artillery and declaring he was willing to meet with Mr Zelensky in Bakhmut, but it was unclear where and when the videos were taken.

The Donetsk city has remained in Ukrainian hands throughout the war, thwarting Moscow’s goal of capturing the region in its entirety. Capturing Bakhmut would sever Ukraine’s supply lines and open a route for Russian forces to press on toward key Ukrainian strongholds elsewhere in Donetsk.

Meanwhile, Mr Putin spent part of his day presenting awards to the Moscow-appointed heads of the four illegally annexed regions of Ukraine, in a ceremony at the Kremlin.

“Our country has often faced challenges and defended its sovereignty,” Mr Putin said. “Now Russia is again facing such a challenge. Soldiers, officers and volunteers are showing outstanding examples of courage and self-denial on the front line.”

In a video address honoring Russia’s military and security agencies, he praised the security personnel deployed to the four regions, claiming that “people living there, Russian citizens, count on being protected by you.”

“Yes, it’s difficult for you,” he said, acknowledging that the situation in the regions is “extremely difficult”, before adding: “Your duty is to do all that is needed to ensure their safety and protection of rights and freedoms.”