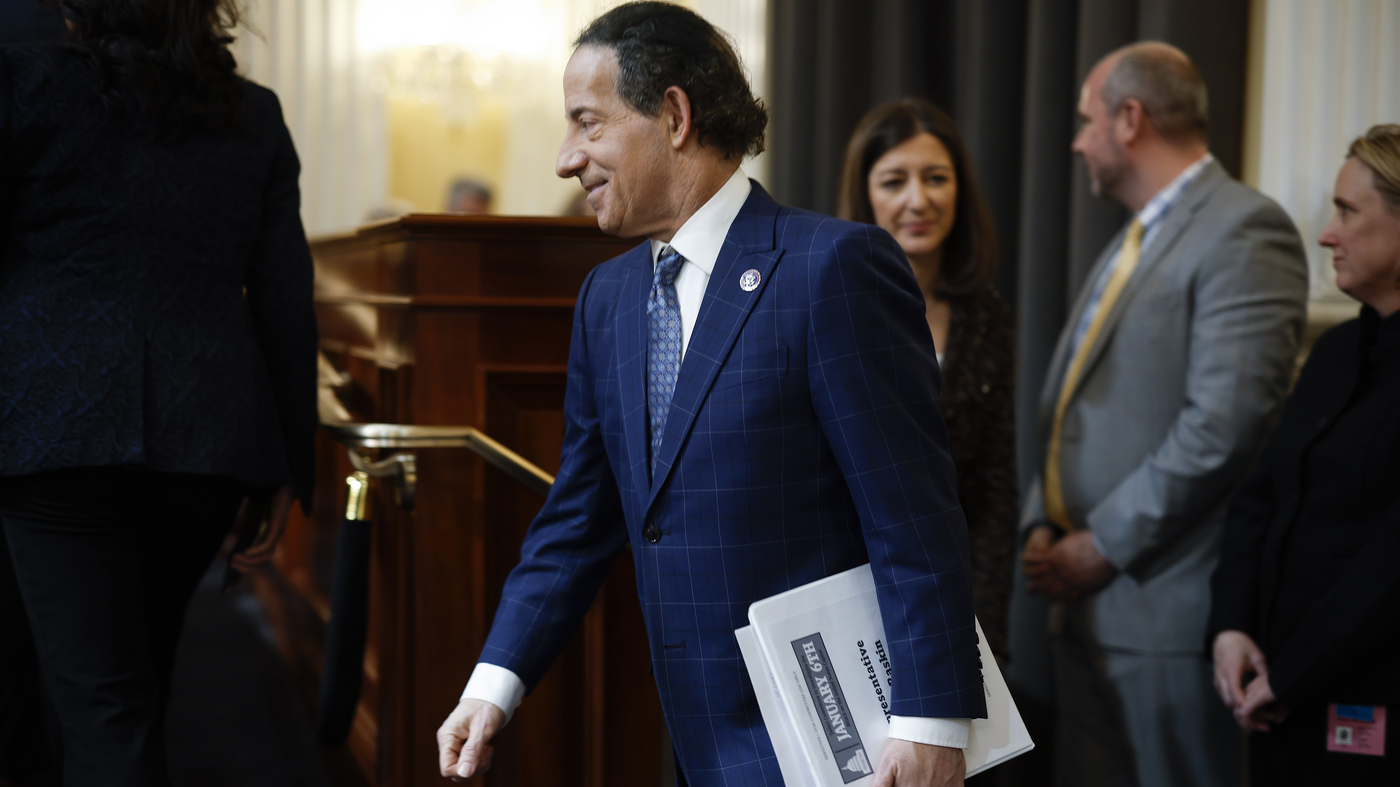 Rep. Jamie Raskin, D-Md., arrives at the final meeting of the Jan. 6 committee on Capitol Hill on Monday.

Rep. Jamie Raskin, D-Md., arrives at the final meeting of the Jan. 6 committee on Capitol Hill on Monday.

It also referred four fellow members of Congress, all Republicans, to the House ethics committee for failing to comply with subpoenas. They are Reps. Kevin McCarthy of California, Jim Jordan of Ohio, Scott Perry of Pennsylvania and Andy Biggs of Arizona.

It’s unlikely the ethics committee would take these on as Republicans take control of the House in January (and McCarthy is poised to be the next speaker).

But Rep. Jamie Raskin, D-Md., — a member of the Jan. 6 panel who previously served as the lead manager in Trump’s second impeachment trial — tells Morning Edition‘s Steve Inskeep that ignoring or burying those recommendations would set “a terrible precedent for the future.”

“It’s of special concern when there’s an attempt to overthrow our election and essentially subdue our constitutional order and have someone seize the presidency who didn’t win it,” he says. “And if members of Congress have knowledge of that and may have been involved in it but refuse to say anything about it, we’re setting a precedent for future attacks on democracy itself. And that’s really the burden of our committee, to make sure that we prevent coups, insurrections, electoral sabotage and political violence in the future.”

As for Trump, who has already announced his bid for reelection, Raskin says the question is not whether potentially prosecuting a former president is the right thing for the country, but whether or not he engaged in criminal conduct.

Trump satisfies the elements for obstructing an official proceeding, Raskin says, adding, “that was the whole purpose of his scheme and he succeeded in interrupting it for four hours, the only time that’s ever happened in American history.”

He adds that the former president also engaged in a conspiracy to make false statements and defraud the U.S. (through the fake electors scheme specifically), and that he “acted to incite, assist and give aid and comfort to an insurrection.” And it’s based on those facts and laws that Trump should be held accountable, Raskin argues.

Raskin spoke to Morning Edition about the committee’s conclusions, what they mean for the public and what could happen next.

This interview has been edited for length and clarity.

On why Trump bears responsibility

More than 900 people have been prosecuted for crimes like assaulting federal officers, destroying federal property, seditious conspiracy, attempt to overthrow or put down the government. Why should the foot soldiers be going to jail and not the ringleaders and the masterminds of this scheme to defeat American democracy? Look, if Donald Trump had succeeded, he’d be bragging about it, how he was the one who came up with the whole plan. It’s very clear to those of us who’ve given two years of our lives to studying this that none of it would have happened without the will of Donald Trump.

On what he hopes the new ethics committee will do

The ethics committee is split between Democrats and Republicans and they’re facing a pretty profound question, which is: If members of Congress get subpoenaed to testify about their knowledge of a criminal offense, and this one an attack on the constitution itself, can they just blow off the subpoena? We’re not able to take them to court, likely because of the Speech or Debate Clause which says that we can’t hold people to account who are members of Congress outside of Congress; We have to hold them to account within the channels of Congress. And so all we really could do is refer them to the ethics committee. And I trust and hope that the members of the ethics committee on a bipartisan basis will consider this very serious problem.

On the possibility of House Republicans investigating his committee

The work of our committee is an open book. We want the whole country to see all of the transcripts, all of the interviews, everything that took place, so we’re going to try to make it public as quickly as possible. Obviously, someone with a jaundiced eye could go in and try to look for something else, but we’re used to that at this point and we really do feel like we’re standing up for democracy for future generations.

On whether he thinks the report has altered public understanding of Jan. 6

I think most of the public understands that Donald Trump’s own attorney general said that his claims in the big lie are, quote, “BS” … They understand that Donald Trump wanted to wave in all of the armed people that he was perfectly aware were in the crowd. They understand that he said, “You go and fight like hell or you won’t have a country anymore.” They understand that he took no concern to try to protect us against the mob that he unleashed against us — so he didn’t call the Army, he didn’t call the National Guard, he sat there in his little dining room watching this unfold like a perfect bystander or someone from another country or another planet. He showed no interest in trying to defend us. I think that story is indelibly imprinted in the public imagination.

The broadcast interview was produced by Ben Abrams and edited by Amra Pasic.