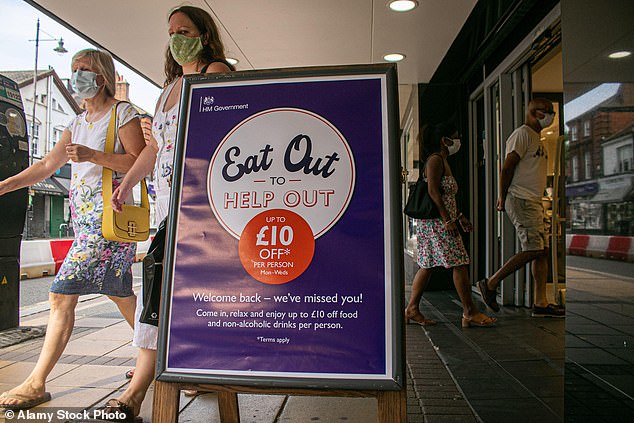 When David Cameron became the Prime Minister in 2010 he promised to put an end to ‘the nonsense of paying people more to stay at home than get a job’.

Within two years, Iain Duncan Smith’s welfare reforms had slashed dramatically the number of people claiming incapacity benefit. Thanks to a thoughtful carrot-and-stick approach, the long-term unemployed were returning to work in droves.

By the start of 2020, more than 33 million were in gainful employment, an all-time high. Britain’s debilitating dependency culture, fostered under Labour, appeared finally to have been if not conquered then certainly cut down to size.

The aim wasn’t just to shrink the welfare bill, it was to change lives and give people a sense of purpose and self-reliance.

Covid put the kibosh on all that.

It wasn’t just furlough, which went on far too long, it was also through crass gimmicks such as the half-baked Eat Out To Help Out scheme, which I dubbed: Money For Nothing And Your Chips For Free

Today, more than half of all households depend on the State for the lion’s share of their income. A record 36 million receive more in welfare and other benefits than they pay in. That’s half as many again as the 24 million during the Blair / Brown years.

And according to a new report from the think-tank Civitas, the true headline figure could be even higher, once the effects of the costly furlough scheme and energy bill subsidies are taken into account.

In cities such as Liverpool, Glasgow and Newcastle, a fifth of the population are living on an assortment of out-of-work benefits, while thousands of job vacancies remain unfilled. Even if we accept that some of them are legitimately unfit for work, many more simply can’t be bothered. Why should they, when the system is happy to indulge them?

Many people believe work is an optional extra

For instance, since Duncan Smith’s time as Work and Pensions Secretary, the number of GP sick notes issued to people claiming to have ‘mental health issues’ has risen 40 per cent to a staggering 4,000 a day. The NHS now hands out antidepressants like Smarties to eight million patients a year. Goodness knows how much that costs.

We are entitled to ask how many of these people are genuinely ill? Are there really 2.5 million people incapable of doing any kind of work? That’s how many are now claiming various incapacity benefits.

In addition, hundreds of thousands of over-50s have simply given up the ghost and taken early retirement.

They can’t all have gold-plated pensions. Presumably, when the money runs out they, too, will be turning to the taxpayer trough for handouts.

Duncan Smith is rightly horrified. Two years of furlough, with the Government paying people to sit at home doing nothing, convinced millions that work was an optional extra and the State would provide their every need.

‘Lockdown changed the psyche of the British people,’ Duncan Smith says. ‘For all those years, we told them you can’t get something for nothing, and all of a sudden they did.

‘The British public thought the Government could do it all, even pay their salaries.’

Rishi Sunak fostered that destructive belief with his drunken sailor spending spree. It wasn’t just furlough, which went on far too long, it was also through crass gimmicks such as the half-baked Eat Out To Help Out scheme, which I dubbed:

Money For Nothing And Your Chips For Free. 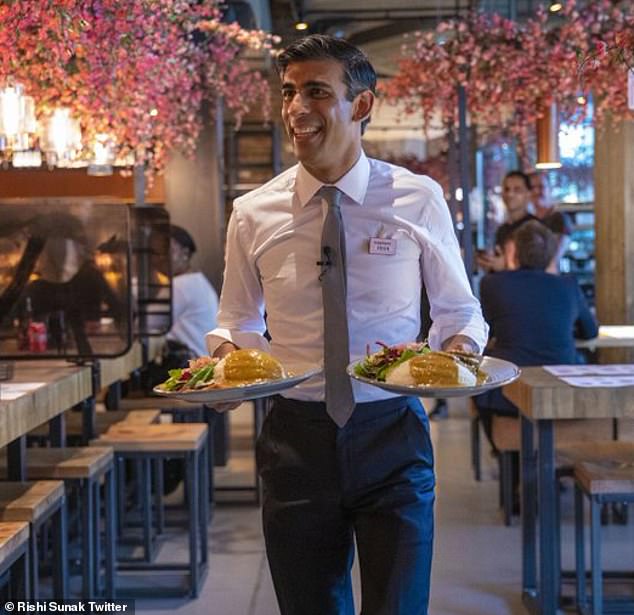 ‘The British public thought the Government could do it all, even pay their salaries.’ Rishi Sunak fostered that destructive belief with his drunken sailor spending spree

Needless to say, that backfired and ended up costing almost £850 million, two-thirds more than Sunak intended. Never mind, taxpayers would pick up the bill.

When the Government is prepared to buy you half-price hamburgers, while expecting nothing in return, why wouldn’t they pick up the rest of your bills?

And when you pay people not to work for such a long period, is it any wonder they come to look on it as an entitlement?

First furlough, then the decision to subsidise gas and electricity bills, have persuaded people that the Government will always be there to bail them out. As a result of the Covid pandemic, Britain is now in the grip of an epidemic of institutionalised indolence.

The Government has failed shamefully to tackle the cult of working from home, especially among civil servants it directly employs.

As of last week, only around half of all staff in Government departments were at their desks. All instructions to return to the office have been contemptuously ignored.

Civil servants in the Home Counties sit around on their sofas stuffing their faces with Hobnobs while boasting about how much money they are saving on everything from commuting costs to lunchtime sandwiches and dry cleaning.

A billion here, a billion there, it soon adds up to real money

Yet ministers lack the courage to strip them of the generous weighting allowances they are continuing to receive, which are supposed to compensate them for the high cost of working in London — something they’re not doing any more.

The bill for that perk, too, is being picked up by taxpayers. A billion here, a billion there. It soon adds up to real money. Under Boris Johnson and now Dishi Rishi, the Conservatives have morphed into a pseudo-socialist, big state, tax-and-spend party.

This was happening even before Covid and the war in Ukraine, as the Tories managed to convince themselves that the way to keep voters sweet, especially in the Red Wall, was to lavish them with goodies — regardless of the cost.

We’ve got the highest taxes since World War II and soon the State will be taking half of almost everything we earn.

And, as the latest figures on the huge numbers now depending on the state for at least half their household income, plus the refusal of so many people to return to the workforce and the absurd numbers on invalidity benefits — genuine or otherwise — the burden is going to fall on a dwindling band of taxpayers. 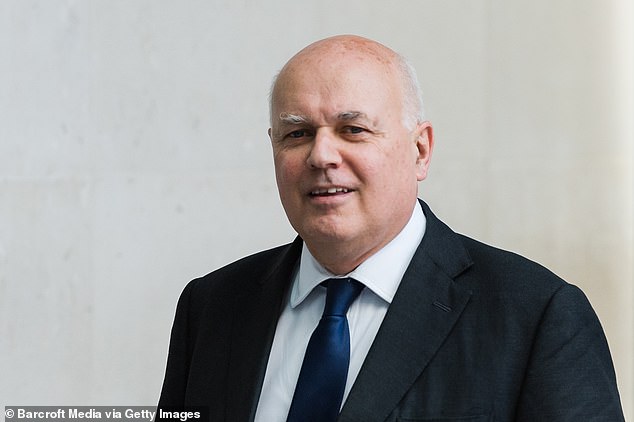 Since Duncan Smith’s time as Work and Pensions Secretary, the number of GP sick notes issued to people claiming to have ‘mental health issues’ has risen 40 per cent to a staggering 4,000 a day

Already, the top 10 per cent of earners pay 53 per cent of all income tax. Yet still Labour and the Left screech that the ‘rich’ should pay even more.

Disgracefully, our latest Chancellor Jeremy Hunt is dancing to the socialists’ tune. His so-called emergency budget was worthy of Labour’s 1970s Chancellor Denis Healey, who promised to squeeze the rich ‘until the pips squeak’.

Not that those earning £50,000 a year can by any measure or means be classified as ‘rich’. Yet they have to pay the higher 40p tax rate once intended for the truly wealthy. And over the next few years, they will be joined by another 1.1 million from the squeezed middle, who are being dragged into the 40p bracket by stealth.

And the threshold for the cynical 45p top rate, which should have been scrapped by the Tories years ago, is actually being lowered to £125,000. Why should anyone strive for promotion or start a business when more than half the money they hope to earn will be confiscated by the Government at source?

Hunt is also putting up corporation tax to 25 per cent — despite promising to cut it to 15 per cent during his failed leadership bid in the summer.

This smash-and-grab raid is justified in the cause of bringing in more money to cut the huge overdraft caused by Covid.

But it’s more likely to cost the Government money, not raise it.

All the evidence proves that when you raises taxes, the overall take falls. As for the 60p rate, when then Chancellor Nigel Lawson cut the top rate from 60p to 40p in 1988, tax revenues went through the roof.

The tried-and-tested way to generate more money is by growing the economy. Yet as the head of the CBI, Tony Danker, says, this Government’s high tax and spend policies will only deter investors and drive away high net worth individuals. 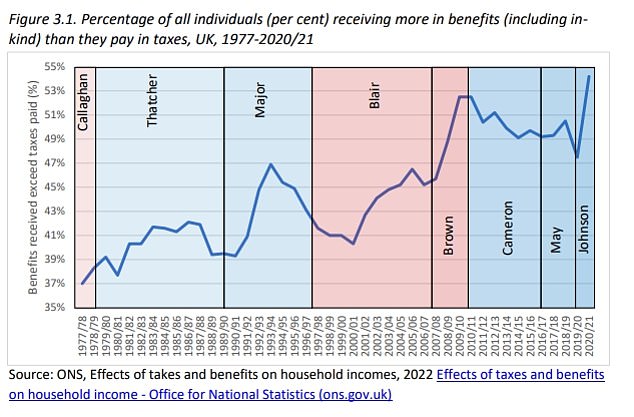 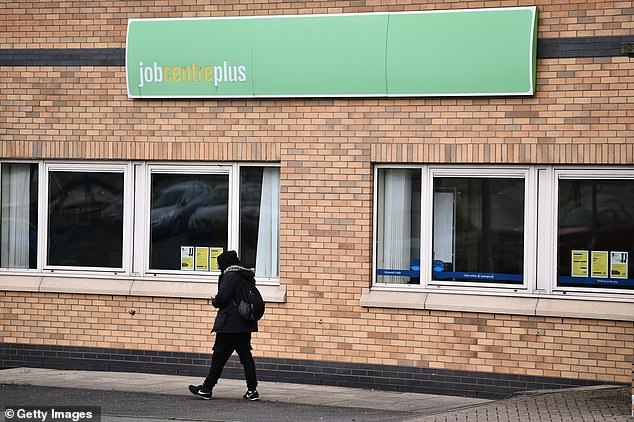 Are there really 2.5 million people incapable of doing any kind of work? That’s how many are now claiming various incapacity benefits

In this topsy-turvy world, Labour is now seen as more likely to cut taxes than the Tories, even though they would almost certainly tax-and-spend even more, starting with the handful of foreign ‘non-doms’, who would simply move overseas. More than 12,000 millionaires have relocated abroad in recent years, taking their taxes with them.

And where millionaires lead, billionaires will surely follow, landing the Treasury with even less money in its coffers.

Yet when the Tories are outspending and out-taxing even Gordon Brown, people can rightly argue that they might just as well vote Labour. How much worse could it be?

Much worse, trust me.

There’s a growing revolt on the backbenches against Hunt and Sunak’s tax-raising plans. MPs are demanding that they think again, especially when it comes to corporation tax, which could prove to be the coup-de-grace for many small and medium-sized businesses.

Implement Tory policies with tax cuts for all

Yes, inflation has to be tackled. But natural gas prices are already down to pre-Ukraine invasion levels and the Governor of the Bank of England says inflation will fall accordingly.

And Hunt can expect a £27 billion windfall shortly, not just because of falling energy prices — which will reduce the need for subsidies — but also because the cost of serving the national debt is coming down. He should use some of that money to cut taxes and stimulate the economy.

As Duncan Smith says: ‘The more we spend, the more we have to tax and borrow. The Government has to do something and do it pretty quick. Start cutting taxes and put money back into people’s pockets.’

Fizzie Lizzie and Kwasi Kwarteng had the right ideas for encouraging growth, even if they managed to bungle the politics.

We were told by the ‘experts’ back then that it was madness to borrow money to cut taxes in a recession.

The only way out of this mess is by kick-starting the economy, getting people back to work and paying taxes, not relying on others to pay their bills for them.

And that will require the Government to stop acting like socialists and implement proper Tory policies, starting with tax cuts for all.

It time to revert to what Call Me Dave promised and end ‘the nonsense of paying people more to stay at home than get a job’.

Money For Nothing And Your Chips For Free was supposed to be a temporary measure.

Not a way of life.