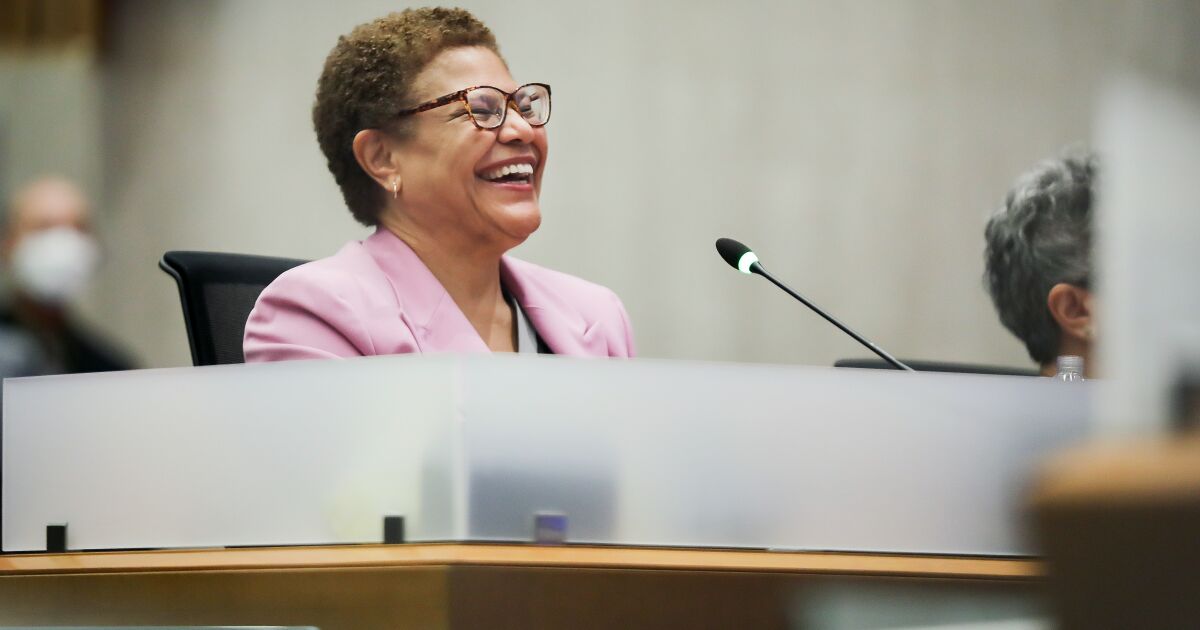 California has had 40 governors in its 172 years as a state. And not one has been a woman. Nor a Black person. Or a Los Angeles mayor.

New L.A. Mayor Karen Bass could be the historic first in all three categories — if she’s seen as making dramatic strides in resolving homelessness in the city.

Yes, that’s a very big “if.” And the odds are heavily against her.

But if she can beat them, Bass would be viewed up and down California as a heroic, coalescing leader who cut through stifling bureaucratic red tape and implemented bold programs to accomplish what others couldn’t, including the current governor.

Bass has promised to bring 17,000 people inside who are now living on the street during her first year in office. If she can deliver on that and follow it up with a similar achievement the next year — actually move lots of people out of tents and into hotel and motel rooms — she could be elected to succeed Gov. Gavin Newsom when he’s termed out in 2026.

That’s shameful speculation, of course. Four years is a political eternity, although the gubernatorial wannabes must start running in three years.

But for Bass, the time is now — not to run, but to begin delivering on her mayoral campaign promise to make a significant dent in L.A.’s homelessness crisis. There are more than 41,000 people who are homeless in the city.

California had 30% of the nation’s homeless in 2022 despite accounting for less than 12% of the population, according to the U.S. Department of Housing and Urban Development. It estimates that 172,000 Californians were homeless during the year.

Bass’ first year as mayor will shape her image for California voters.

This state seems ready to finally elect a woman governor.

For one thing, California politics has dramatically changed in the last few years. Democratic voters outnumber Republicans 2 to 1. And the Democratic electorate is dominated by women. They account for 59% of the party’s likely voters, according to the Public Policy Institute of California.

OK, let’s assume Bass performs brilliantly as mayor and politicos beg her to run for governor in 2026. She’d need to forego running for a second mayoral term. And it would be much easier to just stay put.

But whoever wins the governorship in 2026 is likely to be heavily favored for reelection in 2030. And 2034 would be too late for Bass.

As it is, she’d need to overcome many voters’ age prejudices in 2026. She’ll be 73 that year — one year older than Jerry Brown was when he was elected for a second round as governor. Of course, Brown transcended age.

There are lots of potential Democratic candidates, of course. Some are women.

Besides her invaluable ballot title — containing the word “governor” — she and her wealthy family could practically finance the campaign themselves.

But Kounalakis has been the most obscure lieutenant governor I’ve ever seen, and that’s saying something. Unlike Newsom, who held the position before her, she has done virtually nothing to indicate how she’d perform in the top job.

But leftist San Francisco doesn’t exactly seem on the upswing these days, with homelessness and troubling vacancies in downtown office buildings. Breed is a moderate by San Francisco standards.

State Treasurer Fiona Ma, 56, is considered a possible candidate and would be California’s first governor of Asian descent.

But she’s in a low-profile state office and hasn’t become widely known. There’s also some baggage that could open during a closely watched gubernatorial race. It involves a sexual harassment and wrongful-termination lawsuit she plans to fight.

U.S. Rep. Katie Porter, 48, of Irvine is a Democratic rising star who’s eyeing U.S. Sen. Dianne Feinstein’s seat in 2024. But if she doesn’t reach it, a gubernatorial race two years later would be an option. She’s a prolific fundraiser who has public appeal.

Rep. Adam B. Schiff, 62, of Burbank, is the same as Porter. He’s gearing up to run for the Senate, but if he failed, could aim for governor. Unlike Porter, Schiff has state government experience as a former legislator.

California also has never elected a Latino governor, although Lt. Gov. Romualdo Pacheco Jr. moved up temporarily to fill a vacancy in 1857.

U.S. Sen. Alex Padilla would be a natural to run for governor and could in 2026 without giving up his Senate seat. But if he won, he’d have to leave the Senate. He loves the job, and it could conceivably be his for life.

U.S. Secretary of Health and Human Services Xavier Becerra, 64, a former state attorney general and longtime U.S. House member, is another possibility. But if President Biden is reelected in 2024, Becerra would need to give up his comfy Cabinet post to begin running for governor. And that would be a tough call.

State Atty. Gen. Rob Bonta, 50, would be the first governor of Filipino descent. And his office has historically been a steppingstone to the governor’s suite. But Bonta still hasn’t established a statewide presence among most voters.

And there’s Rick Caruso, 63, the billionaire developer who could attempt to buy the governor’s office as he tried with the mayor’s job. He outspent Bass more than 11 to 1. But the six-term congresswoman and former state Assembly speaker beat him by nearly 10 percentage points.

A Bass-Caruso rematch for governor?

First, the mayor must clear the sidewalks of people living in tents.