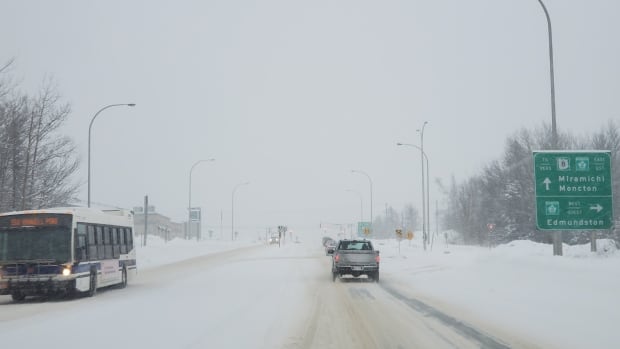 Some schools were closed Monday morning, and others will close early in southern New Brunswick as snowfall warnings have expanded.

Between 15 and 25 centimetres of snow are expected to fall between Monday and Tuesday mornings in Moncton, Saint John, Sussex, Kennebecasis Valley and Fundy National Park and now Fredericton and surrounding areas.

Anglophone North schools are closed in the Rexton area.

The most intense snowfall is forecast for Monday afternoon, but enough snow fell overnight to prompt road closures and warnings from police.

RCMP is warning of a downed power line across Route 635 in Harvey, about 40 kilometres northwest of Fredericton. RCMP are asking people to expect a detour.

Environment Canada’s snowfall warning initially included only the southeastern parts of the province, but was expanded to include all of southern New Brunswick later Monday. The warning says snow, which began Sunday night, is expected to intensify Monday afternoon.

Over southern New Brunswick, the snow will be mixed with rain, ice pellets or freezing rain before changing back to snow Monday night, according to Environment Canada.

“Be prepared to adjust your driving with changing road conditions,” the warning states. “There may be a significant impact on rush hour traffic in urban areas.”

He said northerly winds will gust 40 to 60 km/h late Monday and into Tuesday.