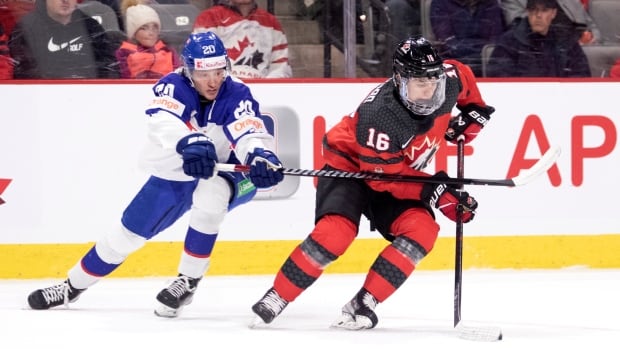 Connor Bedard sees the reminder every time he’s back home.

His gold medal from the last world junior hockey championship — a tournament that was moved to the summer and almost didn’t happen because of COVID-19 — hangs in the 17-year-old phenom’s bedroom.

And the presumptive No. 1 pick at the 2023 NHL draft is eager for more.

“Feels like when you win it, it lasts 10 minutes,” Bedard said. “You want that again right away.”

Another opportunity is right around the corner.

Bedard headlines a star-studded Canadian roster that will be looking to secure the country’s 20th podium-topping performance at the event set to open Boxing Day in Halifax and Moncton, N.B.

Apart from the North Vancouver, B.C., product, already being compared to the likes of Connor McDavid and other franchise-altering talents, Canada boasts a trio of NHL players loaned to the national team in Shane Wright, Dylan Guenther and Brandt Clarke.

“World juniors are something that you grew up watching as a kid and dream playing in,” said Wright, a centre selected No. 4 overall by the Seattle Kraken at the 2021 draft. “A huge honour.”

“We don’t want to get too ahead of ourselves,” added Guenther, a forward with the Arizona Coyotes. “One last shot at winning a world junior championship is special.”

Bedard said Canada’s roster will feature “a bit of everything.”

“Whenever you’re assembling a team across Canada, it’s going to be pretty good,” he said. “We’ve got a lot of size, we’ve got speed, skill. It’s huge getting those [NHL] guys back.

“Those are all impact players in the best league in the world.”

Adam Fantilli — also in the conversation at the top of the upcoming NHL draft — has been impressed with the roster top-to-bottom.

“The best players in the country in one spot,” he said. “Great to see what everybody can do.”

Canada opens the tournament Monday against Czechia, the country commonly known as the Czech Republic, as part of a group playing out of Halifax’s Scotiabank Centre that includes Sweden, Germany and Austria.

The other side of the bracket is set for Moncton’s Avenir Centre and will feature the United States, Finland, Switzerland, Slovakia and Latvia.

Like at the reimagined August event in Edmonton, Russia is banned due to the country’s invasion of Ukraine. The 2023 tournament was originally slated for the Russian cities of Novosibirsk and Omsk before being moved to North America.

Canada, which sits as the favourite, also enters with the pressure of a home-soil crowd and sky-high expectations.

“A privilege,” said head coach Dennis Williams. “You want to be put in these positions. We have to make sure we have our players able to be play uncomfortable — being comfortable at being uncomfortable in those situations.”

Canadian winger Brennan Othmann said the group will be able to attack in a number of different ways.

“Our back end is mean and solid and tough, and our forwards are skilled and big and strong,” he said. “You’re going to get an unbelievable Canada team coming at you.”

“I see a lot of talent,” added Clarke, a Los Angeles Kings defenceman set for his first world juniors. “And there’s guys that can play lower in the lineup, can grind it out, can win puck battles that are really tough to play against.”

The tournament also comes at a time where the sport’s national organization is undergoing significant change following a disastrous 2022 of ugly headlines related to its handling of sexual assault allegations and payouts to victims.

Hockey Canada has a new board of directors and should have a freshly minted CEO in the new year.

Recently filed court documents lay out why police are seeking search warrants to further their investigation into five members of the 2018 World Junior hockey team they believe were involved in an alleged sexual assault of a woman in London, Ont. None of the police allegations have been tested in court and no charges have been laid.

The players and coaching staff at the world juniors have no connection to the scandals, but they’re still going to be wearing the logo — and know there will be a lot of scrutiny.

“We want to make sure we keep that focus on how we do things both on and off the ice,” Willliams said. “We want to minimize any distractions — whether it’s through the pressure or anything on the outside.

And gold — just like every other international tournament Canada enters — is on their mind.

“All the guys that are coming back really want that,” Bedard said of the country’s eight returning players from the summer.

“And for the guys that are new, it’s something that we want to give them.”

Some Nova Scotia hockey fans say their excitement for the world junior hockey championship is accompanied this year by tough conversations about Hockey Canada`s handling of sexual assault allegations.

Halifax hockey dad Kyle Wagner says the scandals within Hockey Canada have sparked conversations in the dressing room of his eight-year-old son’s team, ahead of this year’s tournament hosted jointly by Halifax and Moncton, N.B.

The national sport organization has been mired in controversy for months after it was revealed in May that it settled a lawsuit with a woman who alleged she had been sexually assaulted by several members of the 2018 world junior team.

Executives later revealed that they had paid out $8.9 million in sexual abuse settlements since 1989, excluding the 2018 deal.

Wagner says it’s long been a tradition for his family to watch the event beginning each Boxing Day, adding that his family is excited to cheer on team Canada again this year.

However, Wagner says that he and his family have talked about the controversy and the “horrible” things that have taken place within the hockey world.

He says it’s important that hockey families pay attention to these major issues and hold the national sport organization accountable to “make sure something like this doesn’t happen again.”

New Brunswick, co-host of the World Juniors, is putting direct financial pressure on Hockey Canada to keep its players from engaging in illegal or unethical conduct during the tournament, according to the province’s contract with the hockey organization.