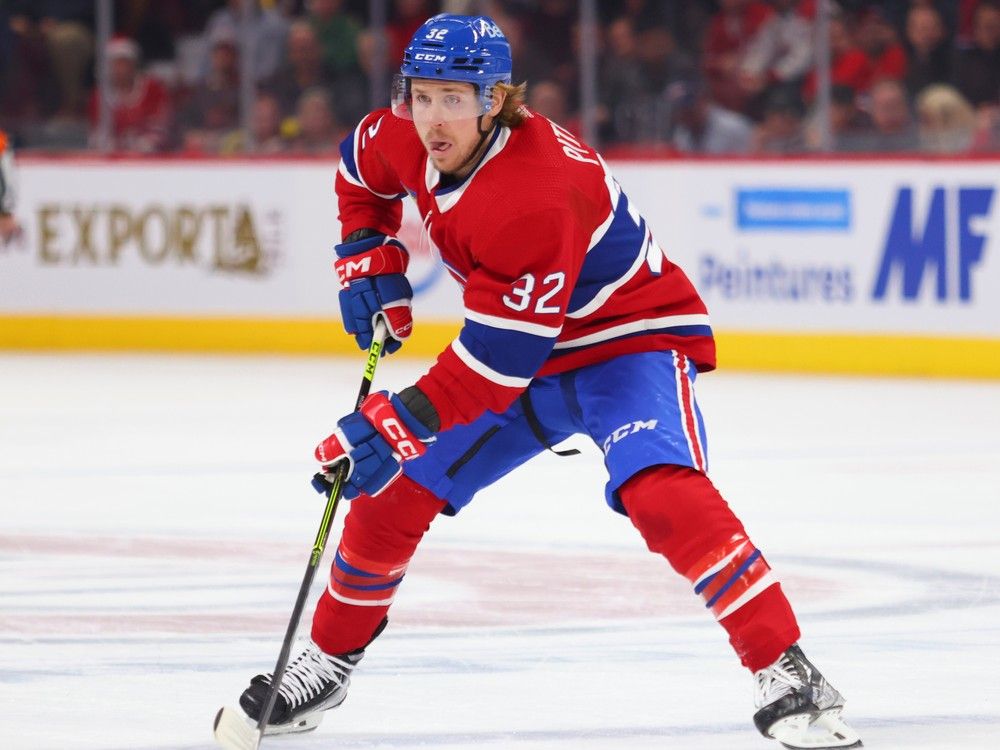 Rem Pitlick admits there was a point this season where he wondered if he’d ever be back in the Canadiens’ locker room.

“Yes,” Pitlick said in the Canadiens’ locker room at the Bell Centre on Saturday when asked that question after scoring the winning goal in overtime for a 3-2 victory over the Toronto Maple Leafs.

The Canadiens sent Pitlick down to the AHL’s Laval Rocket after he cleared waivers in November. He was called up in early December, but was sent down to Laval again later that month after the Canadiens called up Anthony Richard.

On the bright side, the Canadiens signed Pitlick to a two-year, one-way contract worth US$2.2 million last summer. That means the 25-year-old forward earns US$1.1 million per season whether he’s with the Canadiens or the Rocket.

“There’s a lot of different things,” Pitlick said about what has been a roller-coaster season for him. “It was not easy. At the end of the day, I think there was confusion. But I believe I can play in the NHL. That’s not something I ever doubted. But would it be in this organization again? I’m not really sure. There’s a lot of confusion and it feels really good to be back. But I’m not going to ever not believe in myself because I know that I put in effort every single day.”

Making it to the NHL is not easy. Just look at the list of first-round draft picks from NHL drafts over the years and there are a lot of names you won’t recognize. Sticking in the NHL is even harder — and Pitlick is an example of that after being selected by the Nashville Predators in the third round (76th overall) of the 2016 draft after posting 46-43-89 totals in 56 games with the USHL’s Muskegon Lumberjacks during the 2015-16 season.

Heading into Tuesday night’s game against the Boston Bruins at the Bell Centre, Pitlick had played in 94 career NHL games and posted 18-26-44 totals. He had 5-17-22 totals in 18 games with the Rocket this season and 3-2-5 totals in 17 games with the Canadiens.

We apologize, but this video has failed to load.

A season-ending shoulder injury to Cole Caufield — along with injuries to fellow forwards Brendan Gallagher, Jonathan Drouin, Sean Monahan, Joel Armia, Juraj Slafkovsky and Jake Evans — opened a spot for Pitlick on the No. 1 line against the Leafs with Nick Suzuki and Josh Anderson. Pitlick responded with a goal and an assist for the second straight game, giving him 2-2-4 totals in his first three games since his recall from Laval.

When Martin St. Louis took over as Canadiens head coach last season, he said he could relate to what every player on the roster would go through because he went through just about everything during his Hall of Fame playing career. That included not being drafted, being placed on waivers and sent down to the AHL, being an NHL fourth-liner, a first-liner, an all-star and a Stanley Cup champion.

After Saturday’s game, I asked St. Louis for his thoughts on Pitlick after watching him score the winning goal in OT.

“Rem went to Laval early in the season, too,” St. Louis said. “We just didn’t have … there were too many numbers and we didn’t have quite the right chair for him at the time. He went down there and built his game and he was playing some really good hockey before he got called up.

“Circumstances (now) find him probably in a chair that he would have liked to have from the start,” St. Louis added. “But for whatever reason, he just didn’t have quite that chair. Like anything in life, sometimes it’s just not fair. But that’s what life is sometimes. You’ve got to keep pushing … that’s what he’s done and now he comes back up and probably gets more minutes than he had in the beginning of the season. A better chair and he’s taken advantage of it.”

Anderson is in his ninth season and — unlike new linemate Pitlick — has established himself as an NHL player at age 28 after being selected in the fourth round (95th overall) of the 2012 draft by the Columbus Blue Jackets. Anderson is in the third season of his seven-year, US$38.5-million contract.

“Going down (to Laval in November), he never stopped working,” Anderson said about Pitlick after Saturday’s game. “He comes up, gets a chance. I thought he played well, gets sent back down again, and then another opportunity. He creates a chance for himself again and he’s grabbing onto that and running with it. I think that’s what you’ve got to do. I’m so happy for him. He’s a great guy in the locker room and you see the skill asset that he has, it’s incredible.

“Ever since he’s been up, he’s been working hard and just to see him finish it off in OT is really exciting,” Anderson added. “All the guys are happy for him.”

Pitlick is happy to be back in the Canadiens’ locker room.