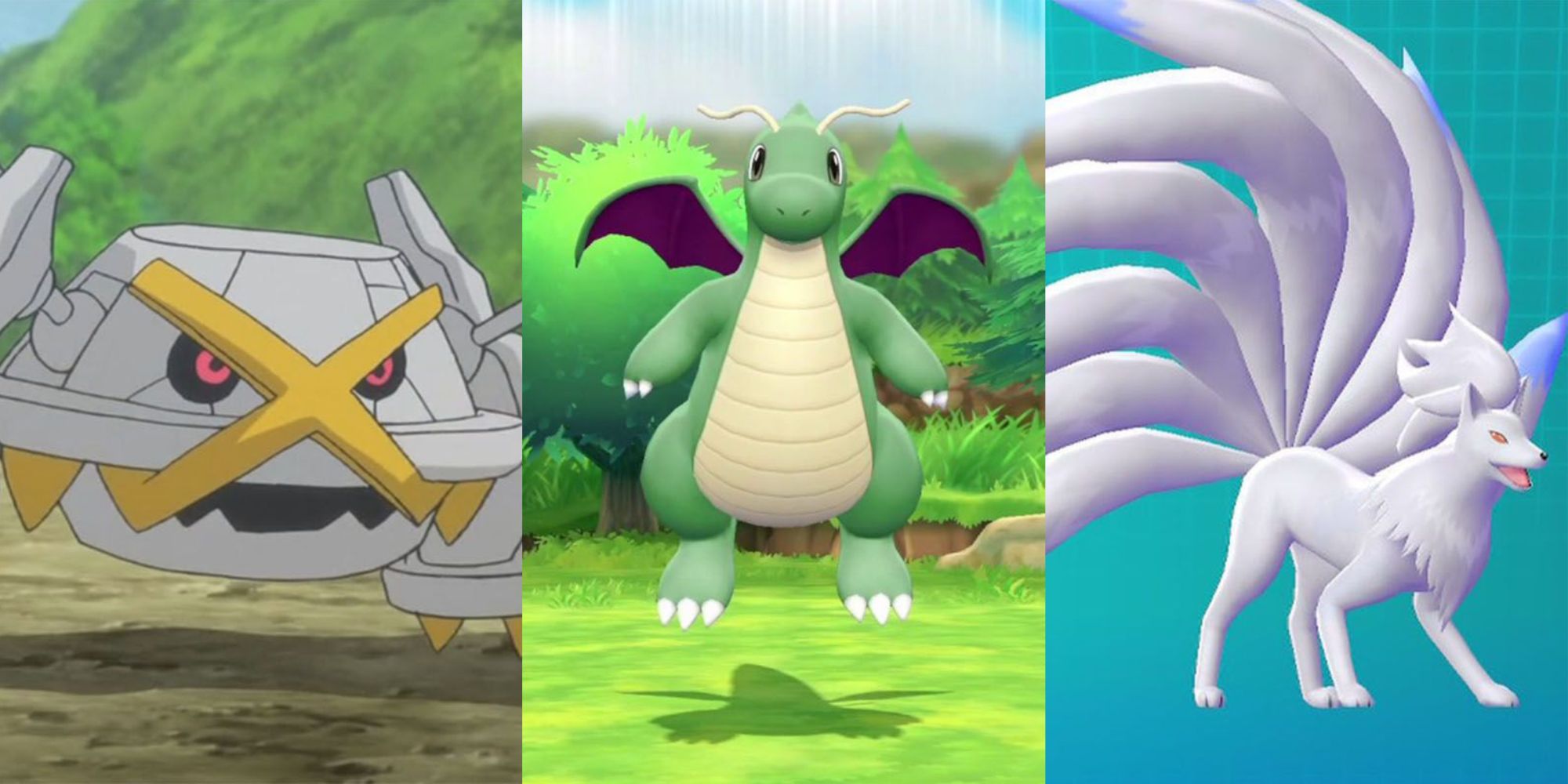 Pokemon is a behemoth of a franchise encompassing all forms of media, including anime, trading cards, feature films, and video games, most recently turning toward the mobile space. While the first shining summer after the release of Pokemon Go might be well behind us, Niantic continues to update the app with new features and Pokemon for dedicated fans.

A feature that has made its way from the main games intoPokemon Go is the coveted shiny Pokemon. They’re extremely rare off-color variations of regular Pokemon, originally introduced in the second generation of games. A shower of glittering stars heralds shinies to drive home how special they are. Encountering any shiny Pokemon is a rare occurrence, but some stand out as particularly beautiful alternative color palettes, even rivaling their original scheme.

Updated November 12, 2022 By Andrew Scariati: Generation after generation brings incredible new shiny variations to look forward to, with starter Pokemon providing some of the highest ceilings for improvement. Go’s rotating event calendar provides ample opportunities to bring some of the best shiny Pokemon into the game, from old favorites like shiny Munchlax to new bears on the block like Ursaluna. With Pokemon Scarlet and Violet’s release, many new Pokemon will be added to the Pokedex, with some like Gimmighoul, already en route to Pokemon Go. With a new location and dozens of new species available to catch and train, there are sure to be some top-notch shinies to hunt across Paldea in the coming months.

Both Magikarp and its evolution, Gyarados are popular shinies with fans, though Gyarados is ultimately the stronger of the two. Magikarp takes on a lovely golden color, while the already fearsome and aggressive Gyarados boast a brilliant new red coloring.

Not only is this shiny vibrant and aesthetically pleasing, but it also chooses the right hue of red, as other shiny Pokemon tend to look like they were splashed with a variety of hideous neon colors. Fortunately for fans, shiny Magikarp is fairly easy to obtain, though evolving them can be a grind with a 400 candy requirement.

While at first glance it seems as though Dragonite’s shiny form isn’t given the best color scheme with its dark green and purple, it actually works quite well. Many fans remark about the sickly color of the green, but the purple wings provide the perfect accent to convey a Dracula-like appearance as Dragonite mimics Golbat.

Not only does the green hue make Dragonite more of a stereotypical dragon in the eyes of fans, but it also reminds them of a certain dragon character, which is why it is so well-loved. The dragon character in question is Elliott from Disney’s 1977 film Pete’s Dragon, who is also green with purple wings.

Both Kantonian Ninetales and their Alolan counterpart actually possess wonderful palette swaps with their shiny versions. The original fox receives a beautiful ash-gray coat with purple accents while, the Alolan version turns a darker shade of purple and gray, both breathtaking in their own ways.

While Kantonian Ninetales can sometimes get lost among the smattering of Fire-type Pokemon, Alolan Ninetales definitely presents a strong case as one of the best Pokemon of its types: Fairy and Ice. This elegant duo of shinies certainly sets a high bar, and their beauty and power make it difficult not to add them to your team.

Charizard is one of the Pokemon fandom’s favorite black-themed shiny variants to date, so it’s no surprise it has also proven popular in Pokemon Go. Charizard’s ferocious Dragon design makes it cool even in its normal form, but when shiny, it transforms into an awesome charcoal-black beast reminiscent of its Mega Evolution X.

RELATED: Pokemon: The Best Games To Shiny Hunt In, Ranked

While Charizard’s original palette earned it incredible fame among Pokemon fans, its shiny version is an unexpected surprise in its altered brightness and somewhat intimidating new appearance. Not many shinies offer such a vast improvement with only one major color swap, but Charizard can certainly claim one of the best glow-ups.

Ponyta is already an incredibly well-designed Pokemon. A horse that’s always on fire? Spectacular. However, it can turn down the heat for people it trusts, so trainers can ride on their backs without getting burned. Those trainers lucky enough to earn a shiny Ponyta’s trust will be able to witness its striking bright blue flames up close.

Be aware that blue fire is significantly hotter than red fire, so it might be better to keep your distance if you’ve just met the Ponyta. Admire it from afar. This understated variant still shines as its original design merely needed a minor change to reach new heights, and this shiny exhibits beautiful simplicity at its finest.

Much like Ponyta, Emboar’s original design benefits from the addition of beautiful, deep blue flames bursting from its body. Its orange upper torso retains its color, while the rest of its main body turns black with striking blue accents and wafting flames.

This rotund pig Pokemon already exudes raw strength and fire, with flames burning around Emboar’s large neck. However, the intimidation factor really ramps up with the color swap to blue and black. Luckily, this starter Pokemon is a Community Day shiny, so it shouldn’t be too difficult to get your hands on one via trade or returning event.

Weavile reverses the light-to-dark shiny trend by taking its ashy gray and blue colors and exchanging them for a deep pink body and yellow-gold headpiece. Its white claws remain untouched to harken back to its original palette and tie the design together.

Weavile and Sneasel both pull off their new colors well, and their claws remaining white is an excellent example of when less is more. If their claws had changed color, the introduction of three aggressive new colors onto Weavile’s design might have been too much and thrown off the balance. Luckily, this bipedal weasel keeps its sharp look and even sharper claws no matter what version you encounter.

Not only is Luxray one of the best Electric-type Pokemon out there, but it’s also one of the most visually distinct. Its original design has a sharp black and electric blue color scheme with yellow highlights. This really sets Luxray apart from most Electric Pokemon, who always seem to be mostly yellow.

Its shiny form swaps its blue for the more traditional Electric yellow, but it works in perfect balance with its more neutral black coat. Luxray’s shiny is more golden than Pikachu, and it substitutes any originally yellow accents for dark orange instead. This striking shiny form makes this king of the jungle look even more regal than its base form.

Rampardos may be one of the most visually simple recolors in all of Pokemon, as the hard blue crown of its head shifts to a bright red, as do its other blue accents. Despite the minor change, Rampardos really ramps up the angry look in its eyes, with the whites now becoming completely red.

Some Pokemon really don’t need an entire redesign to hit the perfect sweet spot for their shiny palette, and the Rampardos family exemplifies this perfectly. Not only does the new red remain consistent across evolutions, but it also remains in all the right places without becoming an overbearing element. Keeping the bright red in perfect balance with the off-gray of its main body makes this one of the most impressive shinies to encounter.

Unlike some of the other Eeveelutions, Umbreon’s shiny color swap focuses only on its accents rather than the entire body. It represents another wonderfully subtle shiny variation, keeping its pure black fur while trading its yellow for dark blue. The changes are limited to the yellow markings on its legs, tail, head, and eyes.

The yellow circles become a lovely vibrant blue, and its normally red eyes are now a piercing yellow, keeping yet another hint of the original design. The markings on this Dark-type Pokemon glow brightly in the black of night as it wanders through the forest, searching for its fellow Eeveelutions.

Not only is Metagross an intimidating Pokemon capable of defending gyms in Pokemon Go, but it also has an incredibly fearsome shiny form. Regular Metagross looks fierce already, with its spiky blue body and dramatic X over its eyes. However, shiny Metagross takes this a step further, with a ghostly silver-gray body and red, piercing eyes.

Shiny Metagross makes every appearance dazzling as trainers gawk at its shiny silver body. To offset the gray, its angry X has become a bright gold, along with the claws under its four arms. Shiny Metagross looks like something a rich person would flaunt at a party, aiming to show off their striking solid silver and gold partner.

The spooky pumpkin family takes shiny forms to the next level with a complete color revamp that not only keeps the spooky spirit of Halloween but even surpasses its original design. Gourgeist and Pumpkaboo each have a primarily orange body with brown accents, as any Jack-O-Lantern might.

Once shiny, Gourgeist really lets its Halloween spirit shine, swapping brown for a black pumpkin face that also gains brighter yellow eyes. Its orange body turns mostly purple, with small remnants of orange lingering to blend the original design with its fantastic shiny variation. This incredible pumpkin family takes the cake as their shiny form enhances their original design and stays true to the themes of the Pokemon, making it the best shiny in Pokemon Go.