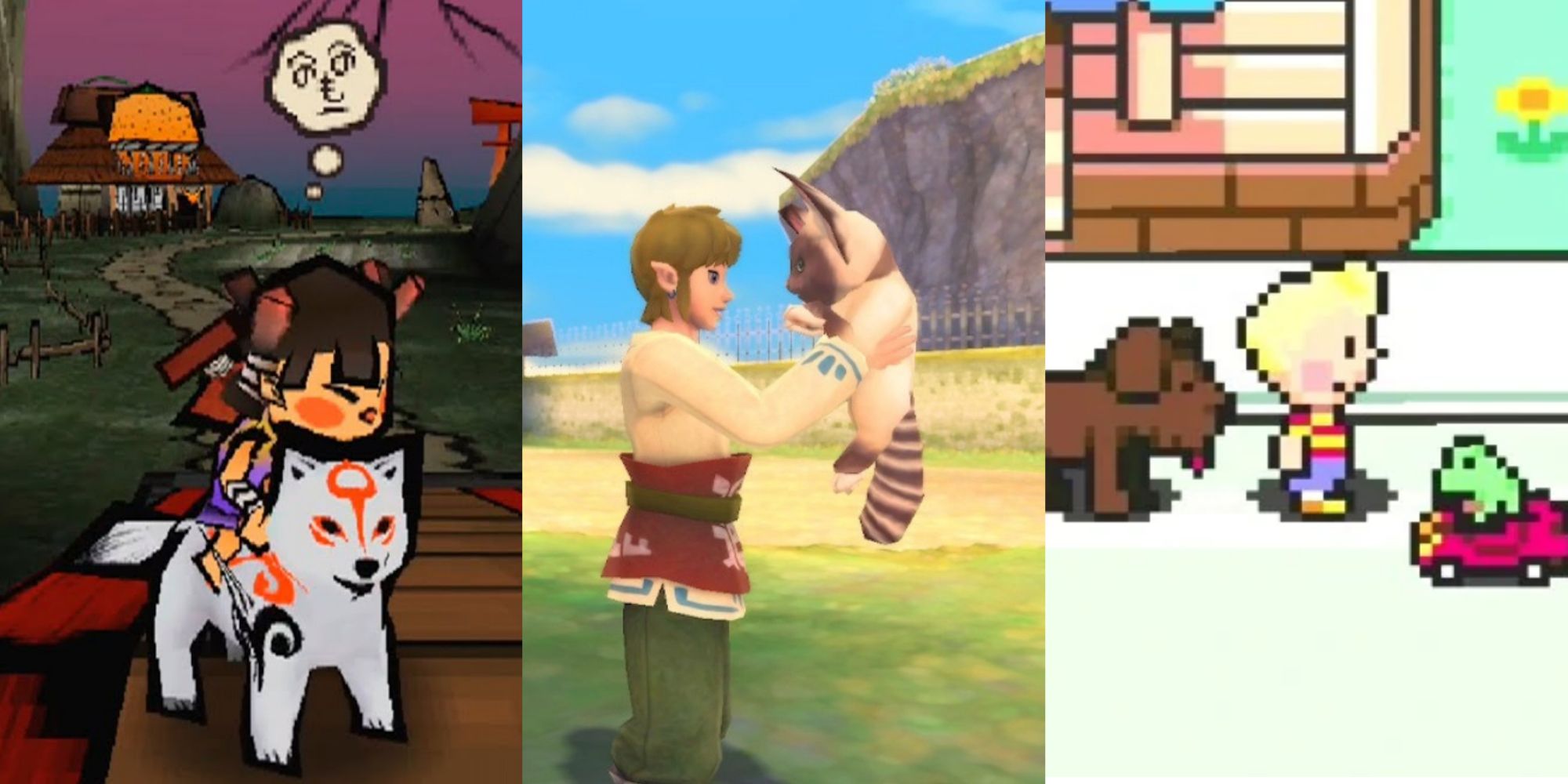 There are some video game creatures that you just look at, and you’re immediately hit with a wave of cuteness aggression. It’s sudden. It’s overwhelming. It makes you go “aww” out loud and want to squish, pinch, or even bite them. Even when they’re feisty, causing mischief, or could kill you with a single glance, these creatures make me overcome with affection.

Related: The Least Intimidating Enemies In Games That Will Mess You Up

Given the chance, I would adopt any of these creatures and treat them like the royalty they are. Sadly, as none of them are real, I can never fulfil this dream or squeeze their cute little faces. I’ll just have to make do with seeing them in their respective games.

10 Sea How Cute They Are: Zora Babies – The Legend Of Zelda: Breath Of The Wild

In Breath of the Wild, the Zora people were redesigned to look more like sharks, and the Zora children were too. You can often see the youngsters running around Zora’s Domain, despite Calamity Ganon’s imminent threat, providing hope for the future of the Kingdom of Hyrule. Whenever I saw them scampering around, I just wanted to scoop them up and squeeze them in my arms forever.

In the Champion’s Ballad DLC, you get to see Prince Sidon as a baby Zora, and he’s undoubtedly the cutest of them all. He’s yet to grow into the shark tail trailing from the back of his head, and he has circles of pink blush that complement his winning smile. Plus, his cheeks are just begging to be squished – by me. I want to squish them.

Riki is the Heropon of the Nopon – just picture a walking Squishmallow, and you’ve got Riki down to a T. As Reyn says, Riki is a “furball”, but you know what? He’s a cute one. And completely squishable. Especially when wearing one of his Totoro-like armor pieces, the Light Hierax Armor.

At one point in the story, Riki tells Melia she can stroke his fur and cuddle with him anytime. I’ve never been more jealous in my life. I’d pinch those blushy cheeks so hard and hug him like the sentient marshmallow he is.

8 Your Angel Or Your Devil: Chao – Sonic The Hedgehog

The Chao are fairy-like creatures that appear in many Sonic games, and it wouldn’t be an understatement to call them some of the most ridiculously lovable creatures in video game history. The neutral Chao are cute, but you can’t forget the Dark and Hero Chao either. The Hero Chao are angelic creatures and have cheerful personalities, whereas the Dark Chao have a devilish appearance and enjoy causing mischief.

Related: Sonic The Hedgehog: Most Underrated Characters In The Series

In Sonic Adventure and its sequel, you can raise them in a Chao Garden – and it’s paradise. It’s no wonder Takashi Iizuka named the Chao Garden as one of the most requested features by fans. If I had my own Chao Garden, I’d never get anything done. I’d spend all day resisting the urge to squish them.

7 The Bites Don’t Even Hurt: Remlit – The Legend Of Zelda: Skyward Sword

Remlit are endearing creatures that can be seen wandering around Skyloft. They resemble ring-tailed lemurs, thanks to their similar markings; however, Remlit have much larger ears that they can use to fly – and to make me want to pinch their little faces.

Picking the Remlit up and having them follow you around is a reprieve from the duties of being a hero. Even when night falls, and they become aggressive, it’s simply impossible to ignore how cute they are. It’d be worth getting bitten a few times to pet one – just look at them. I’m holding back an intense “aww” right now.

6 Living Up To Its Name: Friendly Yan – Final Fantasy 9

As its name suggests, the Friendly Yan is one of the Friendly Monsters in Final Fantasy 9, and will ask you for a Diamond. Although it’s located on Vile Island, it couldn’t be further from this, as its sheep-like appearance and big sweet eyes leave an impression on you right away.

Don’t be fooled by its friendly demeanor, though, as its signature move is actually the strongest physical attack in the game. But why would you want to fight it anyway? All I want to do is cuddle it and shove my face into its fluffy wool.

5 Make Some Noise: Rhyme’s Noise Form – The World Ends With You

Rhyme is a Player in the Reapers’ Game, hoping to gain back her life. Sadly, on the fourth day, Rhyme is attacked by a shark Noise while rescuing Beat. In order to save Rhyme from being completely Erased, Hanekoma attaches Rhyme’s soul to a pin, allowing her Noise form to be summoned.

Related: The World Ends With You: Best Character Designs

Unlike the other Noise, Rhyme’s Noise form is simply adorable. It’s small. It’s pink. It looks like a flying squirrel. You just want to protect her as soon as you see this little creature. And that’s exactly what I would do – after my initial I-need-to-pinch-those-cheeks-right-now reaction, of course.

The Save Frogs are located throughout the Nowhere Islands, allowing you to save the game and deposit or withdraw money. But they’re so much more than just a save point. There are multiple different frogs, including an old frog, a stuffed frog, and my personal favorite, the car frog.

Seeing the car frog in Tazmily Village made me audibly gasp and want to reach through the game to clutch it in my arms. Imagine the scene in Gremlins when Gizmo is driving a toy car. But it’s a frog. You can’t get any cuter than that. Except, maybe, if Gizmo and the frog were racing each other.

Mimikyu is a Ghost and Fairy type that wears a disguise imitating Pokemon’s mascot Pikachu; though, let’s be real, Mimikyu wears it better. Sadly, Mimikyu is a lonely Pokemon, and dons this disguise so that it appears less scary, although the result isn’t quite what it hoped…

However, it’s Mimikyu’s creepiness that makes it all the cuter. Seeing Mimikyu’s true appearance beneath the cloth is a risk, though, as you might die of shock from the sight of it. Still, it’s a risk I’m willing to take to give this Pokemon the love it deserves. I’d have to rein the cuteness aggression in, though, just to make sure I don’t bust its disguise while squeezing it.

If you thought Amaterasu was cute, then you’re not ready to see Chibiterasu. He’s the protagonist of Okamiden and the sweetest wolf pup that you’ll ever see. The clue’s in the name, as he’s just a smaller version of his mother.

When you play as Chibiterasu, everything is just so overwhelming adorable – even when you’re fighting enemies as him, it’s impossible not to say “aww” at everything he does. He’s a good boy who’s deserving of all the belly rubs. And I wouldn’t be able to resist biting those chubby cheeks too. That’s how you show respect to deities, right?

When I first set my eyes on this villager, it was love at first sight. If it were possible, I would have all ten of my villagers be Dom. The best part is his expressions – the big watery eyes, the wobbly chin, the tiny eyebrows. He has it all.

Even when he’s talking about how much he’s sweating, or how he’s named every single one of his (non-existent) abs, he’s still just so cute. All those Nook Miles tickets are definitely worth it – and no, he is never leaving my island. The next Animal Crossing game needs a feature where you can hug your villagers – even if I can’t squeeze Dom’s fluffy wool in real life, this would ease my cuteness aggression for him. A little bit.

Next: The Cutest Video Game Monsters Of All Time