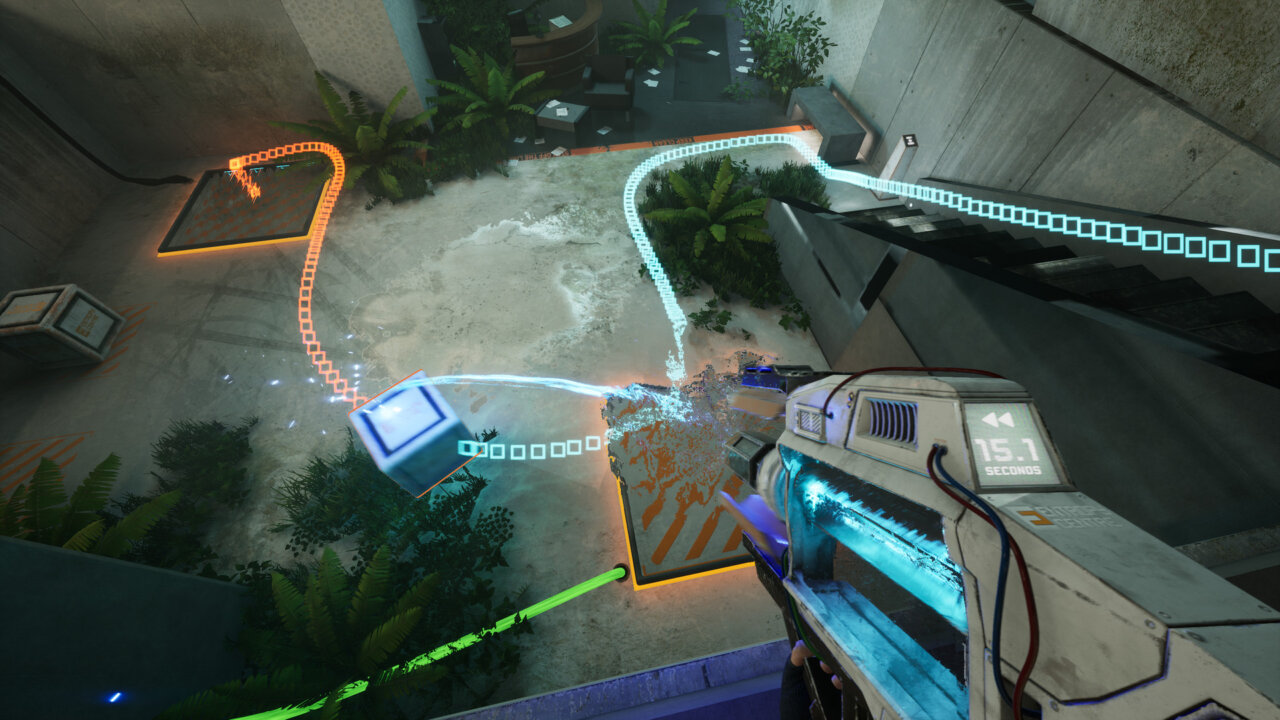 Maybe I’m just becoming too jaded and cynical, but I’m finding it harder and harder to get excited for first-person puzzlers. I’m sure the developers mean well, but every single one I’ve played in the last little while just feels like some variation of Portal, whether it’s Portal in Egypt, Portal in space, or, in the case of The Entropy Centre, Portal in some kind of abandoned test facility.

Which, come to think of it, is Portal.

To be fair to The Entropy Centre, it’s not a total copy. Yes, you’re in some facility that’s clearly seen better days, and yes, you have a gun with some crazy powers, and yes, you need to flip switches to proceed from one room to the next, and yes, you’re accompanied by a cheeky AI, but…uh…it’s got a different name?

Seriously, though, while the Entropy Centre is clearly very similar, it’s got a slightly different mechanic. While you’re expected to open doors by solving puzzles, in this case you have a gun that can rewind an object’s movement. That means that if you have one block but two plates on which to place it – say, one to move a platform, another to open a door – you place it on one, move to it the other, and then rewind time in a way that allows you to cross the platform and get to the door. It requires some pretty inventive thinking from time to time.

The problem is, it doesn’t always feel like there’s a lot of variety. While none of the rooms are identical, there’s also not such a huge variation between them that you feel like The Entropy Centre is constantly evolving. Even when the game starts throwing enemies at you, having a gun that literally reverses time ensures they never get that close to you.

As for the environment and the sidekick, neither are so memorable that they give The Entropy Centre its own distinctive personality. Like the story – about being humanity’s last hope in a moon base – all of it is enough to avoid the game from being just a reskin of Portal, but not enough to set it apart on its own.

Of course, if you just want more Portal, that might make The Entropy Centre enough for you. It’s not much more than that, but it also sticks so closely to the formula that it doesn’t do anything crazy that would make you dislike the game, either. It’s a well-worn path at this point, and The Entropy Centre never once strays from it.

Playstack provided us with an Entropy Centre PS4/PS5 code for review purposes.

Tagline: Are you a fan of Portal? So are the people who made The Entropy Centre, and they won’t let you forget it.