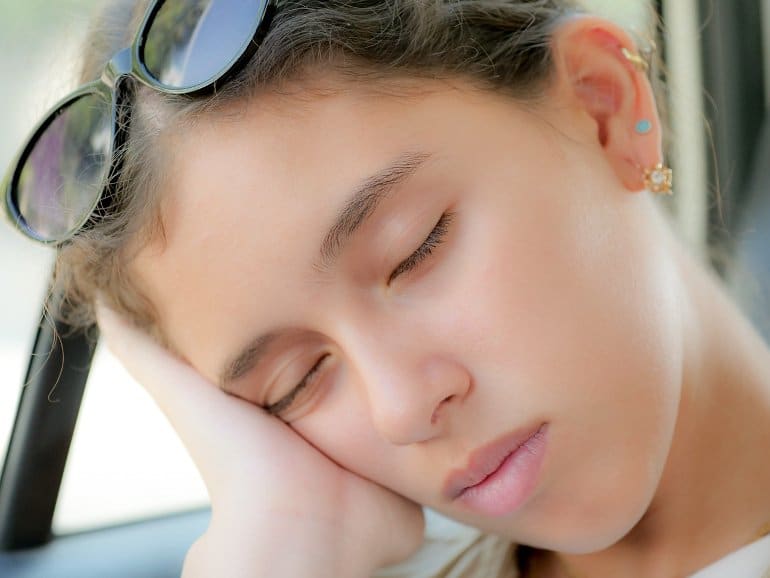 Summary: Teenagers who suffer from insufficient or disrupted sleep may be at higher risk of developing multiple sclerosis later in life.

Insufficient and disturbed sleep during the teenage years may heighten the subsequent risk of multiple sclerosis (MS), suggests a case-control study published online in the Journal of Neurology Neurosurgery & Psychiatry.

Clocking up enough hours of restorative sleep while young may help to ward off the condition, suggest the researchers.

Shift work has also been linked to a heightened risk of the condition, particularly at a young age, but whether sleep patterns—duration, body clock disruption, and sleep quality—might affect this risk hasn’t been fully assessed, they add.

To explore this further, the researchers drew on a population-based case-control study, the Epidemiological Investigation of Multiple Sclerosis (EIMS), comprising 16–70-year-old Swedish residents.

People with MS were recruited from hospitals and privately run neurology clinics and matched for age, sex, and residential area with two healthy people randomly selected from the national population register between 2005 and 2013 and 2015 and 2018.

The researchers focused particularly on sleep patterns during the ages 15 to 19, and the final analysis included 2075 people with MS and 3164 without the condition in this age group when recruited to the study.

Participants were asked about their sleeping patterns at different ages: length of sleep on work or school days, and at weekends or on free days.

Short sleep was defined as less than 7 hours/night; adequate sleep as 7–9 hours; and long sleep as 10 or more hours.

Changes in sleep timing between work/school days and weekend/free days were calculated during the teen years of 15-19 and categorized as less than 1 hour/night, 1–3 hours, and more than 3 hours.

The average age at which MS was diagnosed was 34. Sleep length and quality during adolescence were associated with the risk of an MS diagnosis, which increased in tandem with fewer hours of, and poorer quality, sleep.

Compared with sleeping 7–9 hours/night during the teenage years, short sleep was associated with a 40% heightened risk of subsequently developing MS, after accounting for a range of potentially influential factors, including BMI at age 20 and smoking.

But long sleep, including at weekends or on free days, wasn’t associated with a heightened MS risk.

Similarly, subjectively assessed poor sleep quality during this period was associated with a 50% heightened risk of developing the condition.

Changes in sleep timing between work/school days and weekends/free days didn’t seem to be influential.

The findings remained similar when those who worked shifts were excluded.

The researchers caution that their findings should be interpreted cautiously on account of potential reverse causation—whereby poor sleep could be a consequence of neurological damage rather than the other way round.

But they point out that too little and poor sleep quality is known to affect immune pathways and inflammatory signaling, while the body clock is also involved in regulating the immune response.

And insufficient or disturbed sleep is common among teens, a phenomenon that is partly explained by physiological, psychological, and social changes during this age period, they explain.

“Associations have also been demonstrated between social media use and sleep patterns. Availability of technology and internet access at any time contributes to insufficient sleep among adolescents and represents an important public health issue,” they add.

“Educational interventions addressed to adolescents and their parents regarding the negative health consequences of insufficient sleep are of importance.”

And they conclude: “Insufficient sleep and low sleep quality during adolescence seem to increase the risk of subsequently developing MS. Sufficient restorative sleep, needed for adequate immune functioning, may thus be another preventive factor against MS.”

About this sleep and multiple sclerosis research news

Insufficient sleep during adolescence and risk of multiple sclerosis: results from a Swedish case control study

Shift work, which often results in sleep deprivation and circadian desynchrony, has been associated with increased risk of multiple sclerosis (MS). We aimed at studying the impact of sleep duration, circadian disruption and sleep quality on MS risk.

We used a Swedish population-based case-control study (2075 cases, 3164 controls). Aspects of sleep were associated with MS risk by calculating OR with 95% CIs using logistic regression models.

Compared with sleeping 7–9 hours/night during adolescence, short sleep (<7 hours/night) was associated with increased risk of developing MS (OR 1.4, 95% OR 1.1–1.7). Similarly, subjective low sleep quality during adolescence increased the risk of subsequently developing MS (OR 1.5, 95% CI 1.3 to 1.9), whereas phase shift did not significantly influence the risk. Our findings remained similar when those who worked shifts were excluded.

Insufficient sleep and low sleep quality during adolescence seem to increase the risk of subsequently developing MS. Sufficient restorative sleep at young age, needed for adequate immune functioning, may be a preventive factor against MS.