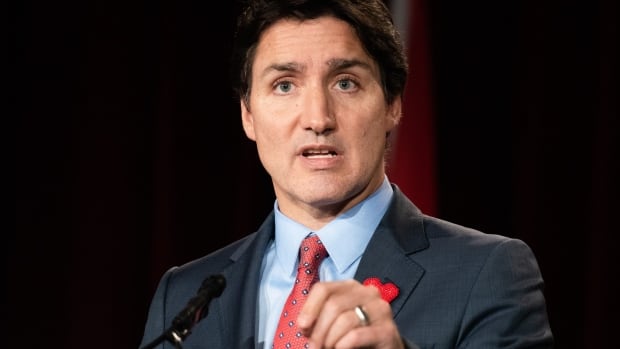 Prime Minister Justin Trudeau has been served with a subpoena to testify at the 2023 trial of a man accused of throwing gravel at the Liberal leader during an election campaign stop in London, Ont., in September last year.

London police charged Shane Marshall, 25, of St. Thomas with one count of assault with a weapon after rocks were thrown at Trudeau as he boarded his federal election campaign bus on Sept. 6, 2021.

Marshall’s lawyer, Phillip Millar, told CBC News it’s “unbelievably rare” that in a criminal case such as this one, the person who’s been allegedly assaulted wouldn’t be called to testify in the first place.

“In every prosecution of this type, the complainant or victim would be a witness and testify as to what happened,” the London lawyer said. “For the assault to be established in law, the person on the receiving end of it has to know it’s happening.”

Video footage appears to show that as Trudeau was returning to his campaign bus, pebbles or small gravel pieces were thrown his way while he was facing the opposite direction.

Shortly after, Marshall, who was president of the People’s Party of Canada’s Elgin Middlesex London riding, was removed from his position in response to the allegations.

“Immediately while aboard the bus, the PM told reporters that he ‘might have’ been struck, but seemed unsure if any pebbles had hit him. When challenged on whether anything had hit him, the PM replied, ‘Does it matter?'” the documents said.

The subpoena goes on to say that “in subsequent recordings, the PM states with certainty that he had in fact been struck by gravel.” Millar said he expects to cross-examine Trudeau on the conflicting statements.

“Those two versions have to be tested because if the first one is true, then the assault with a weapon is not made out,” he said.

When asked how likely it is that Trudeau would testify, Millar said if the prime minister were the victim of a serious crime such as assault, he should legitimately come forward and testify so that the accused could be held accountable.

“The PM is a Canadian citizen like everybody else and shouldn’t be subject to different standards when it comes to charges on a very serious crime,” Millar said. “I don’t know how the Crown can make a case without having him testify.”

The subpoena states Trudeau’s testimony is both material and necessary because it connects the facts of the incident to the elements of the charge, and no one other than the prime minister can provide that evidence.

Millar said if Trudeau doesn’t show up to testify in person or virtually, the court could either issue a warrant enforcing attendance or the Crown would be forced to withdraw the charges.

The Prime Minister’s Office (PMO) has confirmed to CBC News that the subpoena has been received and there will be a response in due course.

The trial date is set for March 7 and expected to last one day.