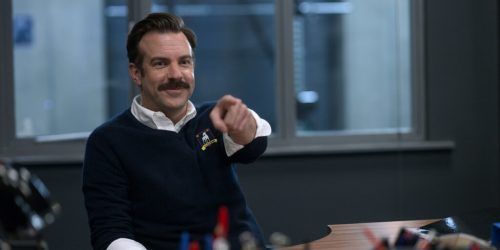 Ted Lasso, the Apple TV+ comedy starring Jason Sudeikis, will be back for a third season this spring. The streaming platform didn’t specify a première date, but it did release a first-look photo with Ted (Sudeikis) standing face to face with Nate (Nick Mohammed), while Rupert (Anthony Head) looks on. The show won over viewers during the pandemic, with its storyline of an inept yet optimistic American college football coach who is hired to coach a professional English soccer team. It has won 11 Emmy Awards, as well as a Peabody Award.

Sandler tribute will air on CNN

Adam Sandler will receive the Mark Twain Prize for American Humor in a broadcast airing on CNN. Several of the actor and comedian’s friends and co-stars will take the stage, including Jennifer Aniston, Judd Apatow, Drew Barrymore, Steve Buscemi, Conan O’Brien, Chris Rock and David Spade. The ceremony will take place March 19 at the Kennedy Center Concert Hall in Washington, D.C., and the program will air in full March 26 on CNN. Previous honorees include Julia Louis-Dreyfus, Tina Fey, Eddie Murphy and Dave Chappelle.

The Last of Us tops streaming

The post-apocalyptic drama The Last of Us debuted at the top of Reelgood’s streaming ratings for the week of Jan. 12-18. Available on HBO Max and Crave, it’s set 20 years after a global pandemic and stars Pedro Pascal and Bella Ramsey. Two movies followed in the rankings: mystery thriller The Pale Blue Eye (Netflix) and comedy-horror The Menu (HBO Max). Kaleidoscope, Netflix’s heist miniseries starring Giancarlo Esposito, landed at No. 4. Yellowstone took up the No. 5 spot, with seasons 1-4 on Peacock Premium and season 5 on Paramount Network. Yellowstone streams on Paramount+ and Prime Video in Canada.

A new show geared to tweens is spotlighting books with voices, characters and perspectives from under-represented communities. Hamilton-based Instagram influencer Ainara Alleyne is the 13-year-old host of Ainara’s Bookshelf, as well as an executive producer, co-creator and co-writer. The show comprises 10 episodes of 11 minutes each, and features a book review and an interview with an author or celebrity in each instalment. Among those set to appear are David A. Robertson, Lawrence Hill, Jerry Craft, Claribel A. Ortega and Peter Ramsey. Ainara’s Bookshelf is available on the marbleKids YouTube channel.