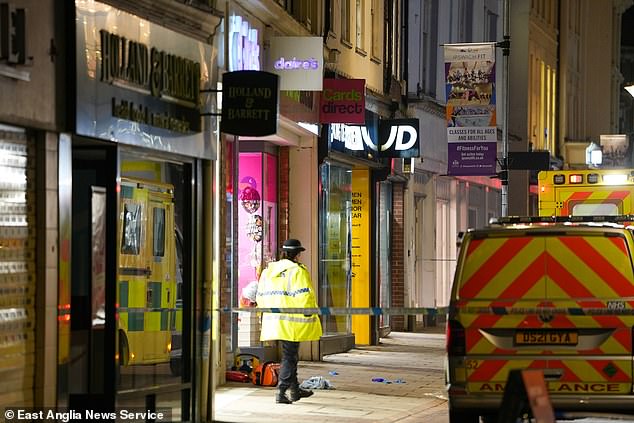 By Stewart Carr For Mailonline

Two teenagers have been charged with murder over the death of an 18-year-old man who was fatally stabbed in Ipswich town centre.

Raymond James Quigley, known as ‘James’, from Wymondham, Norfolk, lost his life in the attack in broad daylight on Tuesday, January 17.

Suffolk Police said Mr Quigley was approached by two other males and stabbed. A second man who was with the victim was chased and threatened with a knife by one of the suspects during the attack, but managed to escape unharmed.

The suspects then made off from the area in different directions.

Police at the scene after a man was stabbed to death in the town centre of Ipswich, Suffolk 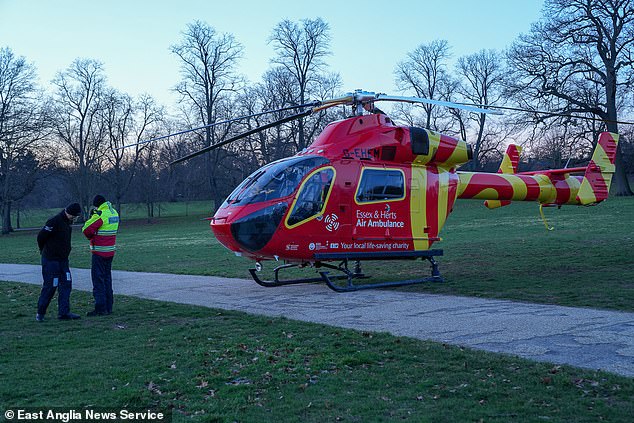 An air ambulance helicopter in Christchurch Park, Ipswich, Suffolk, after a man was fatally stabbed in the nearby town centre

Police units and ambulance crews were quickly on the scene but despite the best efforts of emergency workers, Mr Quigley sadly died at the scene.

A Home Office post-mortem examination concluded that Mr Quigley sustained four stab wounds to the torso and died as a result of these injuries.

A Section 60 Authority was implemented by Suffolk Police shortly after the attack for 24 hours, providing officers with additional powers to stop and search people in Ipswich town centre.

On Saturday, January 21, investigating officers arrested Alfie Hammett, 18, of Rushmere St Andrew, and a 17-year-old who cannot be named for legal reasons.

The pair were taken into police custody for questioning and have since both been charged with murder and possession of an offensive weapon in a public place.

They were remanded in custody to appear before Ipswich Magistrates’ Court tomorrow.