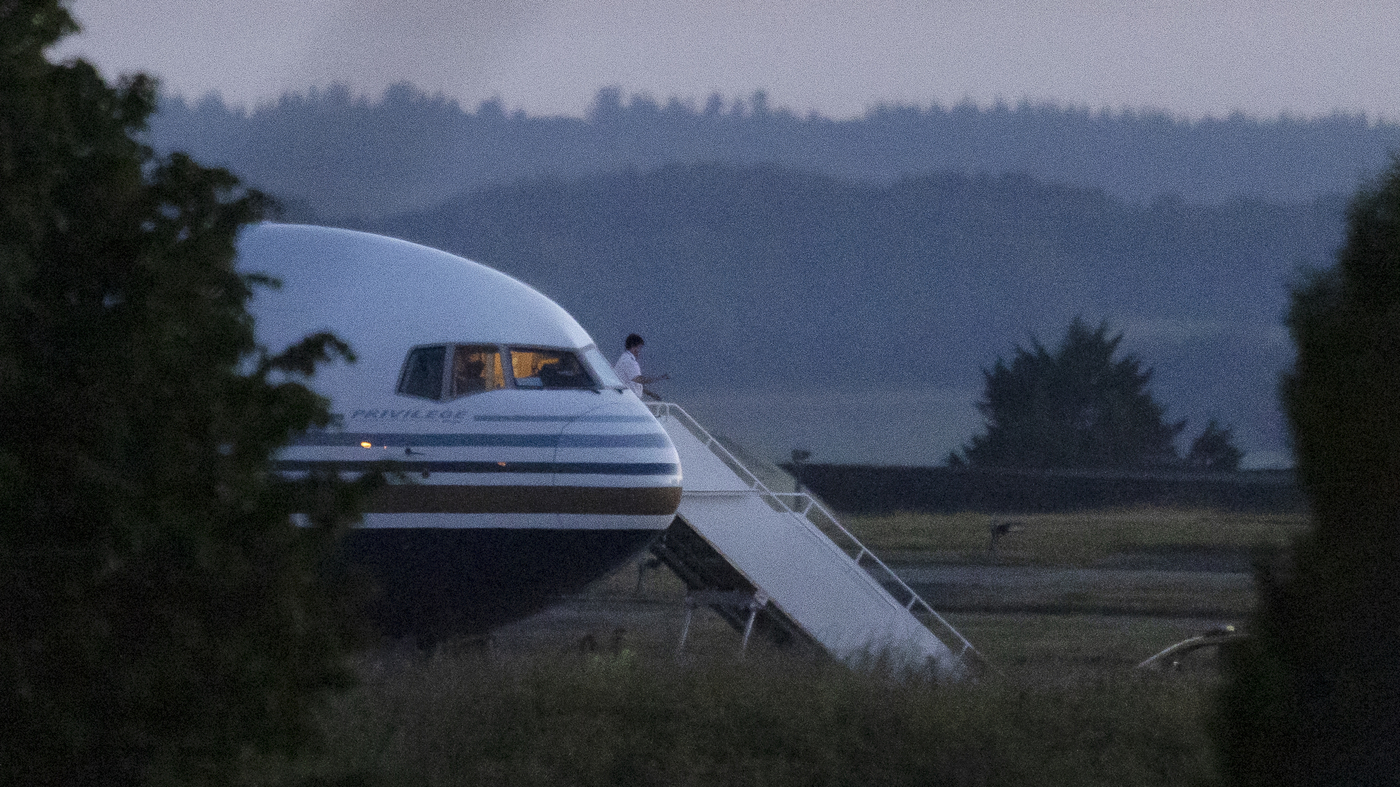 A pilot gestures from the grounded EC-LZO Boeing 767 flight, initially meant to deport Rwandan asylum-seekers, at Boscombe Down Air Base in Boscombe Down, England, on June 14. The flight taking asylum-seekers from the U.K. to Rwanda was grounded at the last minute, after the intervention of the European Court of Human Rights.

A pilot gestures from the grounded EC-LZO Boeing 767 flight, initially meant to deport Rwandan asylum-seekers, at Boscombe Down Air Base in Boscombe Down, England, on June 14. The flight taking asylum-seekers from the U.K. to Rwanda was grounded at the last minute, after the intervention of the European Court of Human Rights.

LONDON — The High Court in London issued a long-awaited ruling Monday that found a controversial British immigration policy was lawful, months after the U.K. government first introduced the plan to deport hundreds of potential asylum-seekers to Rwanda, where their claims would be heard and decided by Rwandan authorities.

The court found that the plan did not breach Britain’s legal obligations under domestic legislation and the United Nations Refugee Convention, but that the country’s interior minister must in the future consider carefully the circumstances of individual asylum claimants if their cases are to be heard in Rwanda rather than the U.K.

The justices wrote in their decision that Priti Patel, a previous interior minister who served under Boris Johnson’s premiership, had implemented the policy in a “flawed” manner in several of the cases the court considered.

British immigration lawyers and human rights groups had initiated a series of legal challenges soon after the policy was announced in April, insisting that individuals who had arrived in Britain to claim asylum could face possible rights violations at the hands of Rwandan authorities.

The first chartered aircraft designed to transport dozens of migrants designated for deportation late this summer left entirely empty, after every individual was able to challenge the grounds for removal from Britain — some of them just minutes before their scheduled departure.

The Conservative government of Prime Minister Rishi Sunak, like those led by Boris Johnson and Liz Truss before him this year, has struggled to address the growing number of migrants arriving in southern England, either in small boats or trucks from France.

In the year to June 2022, the U.K.’s national statistics office recorded more than half a million net migrant arrivals through government-approved routes, up from 173,000 in the year before. Meanwhile, more than 45,000 migrants have arrived in small boats across the English Channel from France so far this year, compared with fewer than 30,000 in 2021.

The partnership with Rwanda, whereby Britain’s Interior Ministry would pay the African nation to handle asylum claims, was ostensibly intended to deter future arrivals in the U.K. through such dangerous routes — which the British government labels “illegal.”

But international organizations including UNHCR, the United Nations’ refugee agency, raised concerns about the proposal, as did officials inside the British government’s own bureaucracy.

Underscoring the urgency of the situation, an inflatable vessel ran into difficulties around 30 miles west of the port city of Dover in the early hours of an icy morning on Dec. 14. Dozens of people were pulled alive from the water, but at least four died, despite a large and rapid rescue effort. Late last year, a far worse tragedy saw dozens die when another boat capsized.

A young man from Sudan, who was identified in British courts by the initials OOA, tells NPR he arrived in Britain over the summer as a stowaway in the back of a truck. Police placed him in handcuffs soon after he arrived, he says, and he was detained for more than two months before lawyers won his release on bail.

“I didn’t imagine that the moment I arrived, that I would be placed into handcuffs, as if I was a criminal,” he says.

Sophie Lucas, one of the lawyers working at the Duncan Lewis law firm that represents him, says Britain’s entire deportation policy should be prevented from ever taking effect.

“We’re seeking to ensure that none of our clients are removed to Rwanda,” says Lucas. “It is deeply distressing to have this prospect of being removed to a country where they have no connection, and where their fundamental rights may not be respected.”