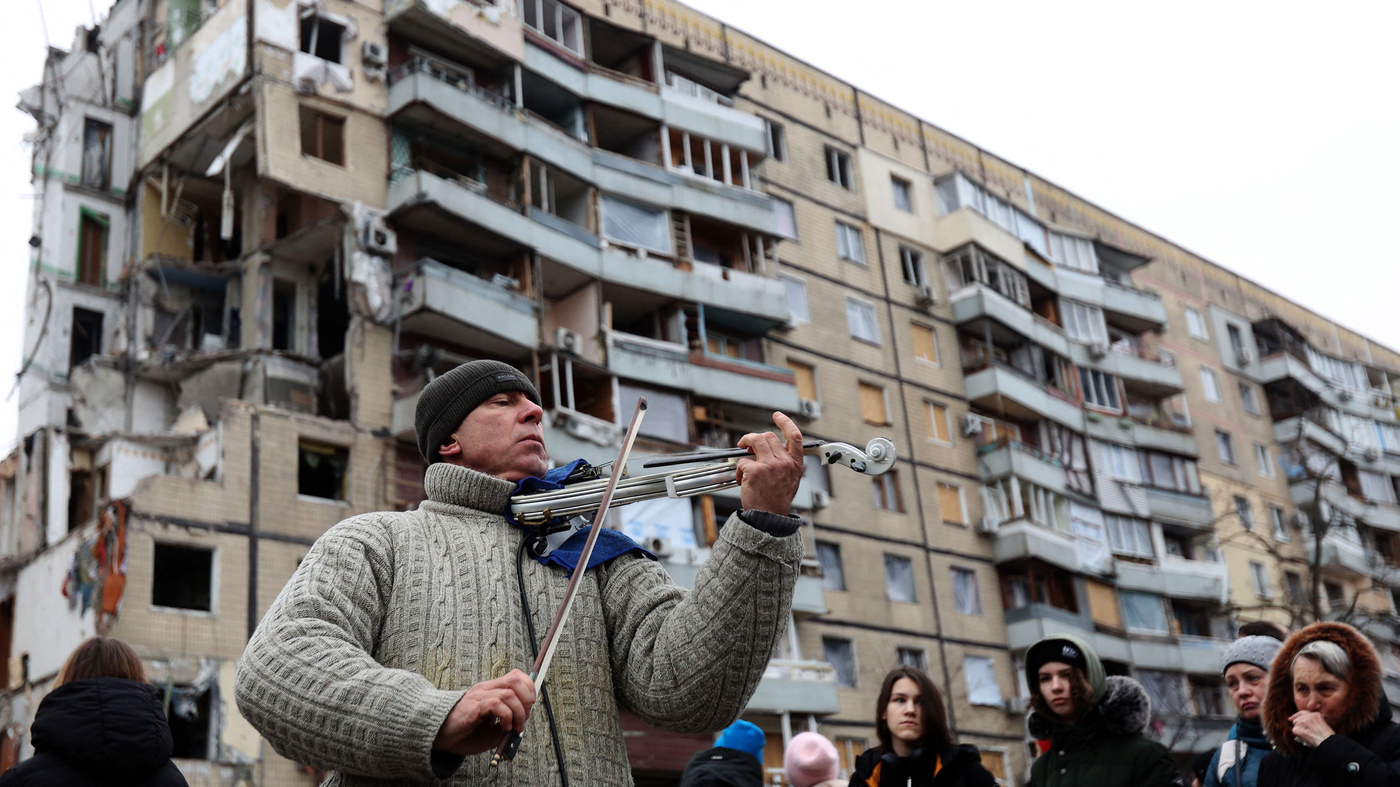 A man plays violin on the sidelines of a religious service held by local residents in front of an apartment building in the Ukrainian city of Dnipro on Sunday. The building was destroyed by a Russian missile strike on Jan. 14.

A man plays violin on the sidelines of a religious service held by local residents in front of an apartment building in the Ukrainian city of Dnipro on Sunday. The building was destroyed by a Russian missile strike on Jan. 14.

Here’s a look ahead and a roundup of key developments from the past week.

Attention continues to be fixed on Germany as it weighs whether to send Ukraine its Leopard 2 battle tanks. The country has come under increasing criticism for so far declining calls to send its tanks. On Tuesday, the German defense minister is due for talks with NATO’s secretary-general in Berlin.

Meanwhile, Poland is eager to send its Leopard tanks to Ukraine and is awaiting a response from Berlin, which needs to give permission for other countries to transfer the German-made tanks. Germany’s foreign minister said in an interview with French television Sunday that Germany would not object.

Ukrainians mourn the residents killed when a Russian missile struck an apartment building in the southeastern city of Dnipro last week. It was one of the deadliest recent attacks on civilians of the war, with more than 40 people dead and 80 wounded.

Russia claimed to take control of the eastern Ukrainian town of Soledar last week, but Ukrainian and U.S. officials have disputed the claim.

Britain pledged to send Challenger 2 tanks to Ukraine last Tuesday, calling it the “most modern tank at Ukraine’s disposal.”

Ukrainian Interior Minister Denys Monastyrsky and over a dozen other people died last Wednesday when a helicopter crashed into a kindergarten building in a suburb of Kyiv. One child was killed and 11 children were among more than two dozen injured.

The U.S. and other NATO countries pledged to ship a huge package of heavy weapons to Ukraine. The U.S. part is worth $2.5 billion. But Germany and the U.S. declined to deliver one thing Ukraine wants: tanks.

The White House said the administration will designate the Wagner Group a significant transnational criminal organization and impose stronger sanctions on the Russian private military company last Friday over its role in the Ukraine war.

Ukraine reels from a devastating week.

A tradition of plunging in an icy river persists in Ukraine, despite the war.

The U.S. and other NATO countries announce a massive weapons package for Ukraine.

Funerals begin for dozens of people killed in an attack on a Dnipro apartment complex.

Amid the rubble in Dnipro, Ukraine, a frantic search grows increasingly desperate.

Russia is touting a rare military victory, but Ukraine disputes that claim.

Russia’s war in Ukraine is changing the world: See its ripple effects in all corners of the globe.

You can read past recaps here. For context and more in-depth stories, you can find more of NPR’s coverage here. Also, listen and subscribe to NPR’s State of Ukraine podcast for updates throughout the day.