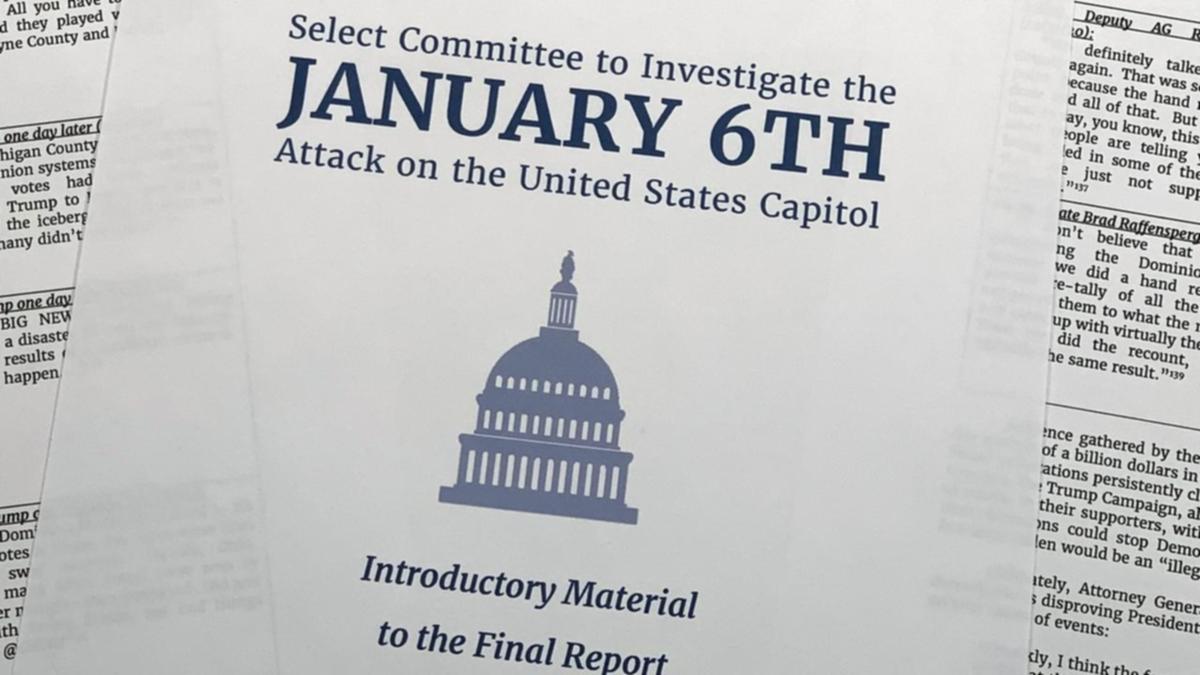 The US House committee final report on the Capitol riot asserts that Donald Trump criminally engaged in a “multi-part conspiracy” to overturn the lawful results of the 2020 presidential election.

It also asserts he failed to act to stop his supporters from attacking the Capitol, concluding an extraordinary 18-month investigation into the former president and the violent insurrection two years ago.

The 814-page report released on Thursday comes after the panel interviewed more than 1000 witnesses, held 10 hearings and obtained millions of pages of documents.

The witnesses – ranging from many of Trump’s closest aides to law enforcement to some of the rioters themselves – detailed the former persident’s actions in the weeks ahead of the insurrection and how his wide-ranging pressure campaign to overturn his defeat directly influenced those who brutally pushed past the police and smashed through the windows and doors of the Capitol on January 6, 2021.

“The central cause of January 6th was one man, former president Donald Trump, who many others followed,” the report says.

“None of the events of January 6th would have happened without him.”

The insurrection gravely threatened democracy and “put the lives of American lawmakers at risk,” the nine-member panel concluded.

The report’s eight chapters of findings tell the story largely as the panel’s hearings did – describing the many facets of the remarkable plan that Trump and his advisers devised to try and void President Joe Biden’s victory. The lawmakers describe his pressure on states, federal officials, lawmakers and Vice President Mike Pence to game the system or break the law.

Trump’s repeated lies of widespread voter fraud resonated with his supporters, the committee said, and were amplified on social media, building on the distrust of government he had fostered for his four years in office. And he did little to stop them when they resorted to violence and stormed the Capitol.

The massive, damning report comes as Trump is running again for the presidency and also facing multiple federal investigations, including probes of his role in the insurrection and the presence of classified documents at his Florida estate.

This week is particularly fraught for him, as a House committee is expected to release his tax returns after he has fought for years to keep them private. And Trump has been blamed by Republicans for a worse-than-expected showing in the midterm elections, leaving him in his most politically vulnerable state since he won the 2016 election.

It is also a final act for House Democrats who are ceding power to Republicans in less than two weeks, and have spent much of their four years in power investigating Trump.

Democrats impeached Trump twice, the second time a week after the insurrection. He was acquitted by the Senate both times. Other Democratic-led probes investigated his finances, his businesses, his foreign ties and his family.

On Monday, the panel of seven Democrats and two Republicans officially passed their investigation to the Justice Department, recommending the department investigate the former president on four crimes, including aiding an insurrection.

While the criminal referrals have no legal standing, they are a final statement from the committee after its extensive, year-and-a-half-long probe.

Trump has tried to discredit the report, slamming members of the committee as “thugs and scoundrels” as he has continued to falsely dispute his 2020 loss.

In response to the panel’s criminal referrals, Trump said: “These folks don’t get it that when they come after me, people who love freedom rally around me. It strengthens me.”

The committee has also begun to release hundreds of transcripts of its interviews. On Thursday, the panel released transcripts of two closed-door interviews with former White House aide Cassidy Hutchinson, who testified in person at one of the televised hearings over the summer and described in vivid detail Trump’s efforts to influence the election results and indifference toward the violence as it occurred.

In the two interviews, both conducted after her July appearance at the hearing, she described how many of Trump’s allies, including her lawyer, pressured her not to say too much in her committee interviews.