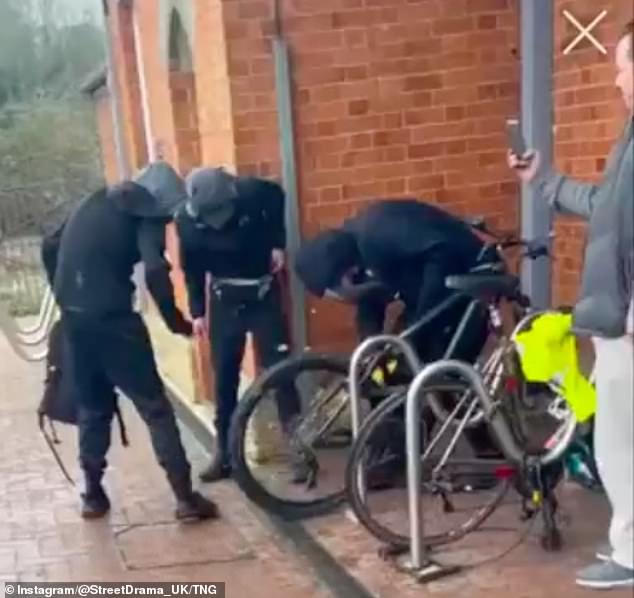 By Elly Blake For Mailonline

This is the moment brazen thieves used an angle grinder to steal a commuter bicycle outside a busy railway station in broad daylight.

The act was caught on camera by shocked bystanders who called the police as the thieves shouted expletives at them including to ‘shut the f**k up’.

One onlooker can be heard asking ‘why are you doing it?’ as someone else calls the cops. 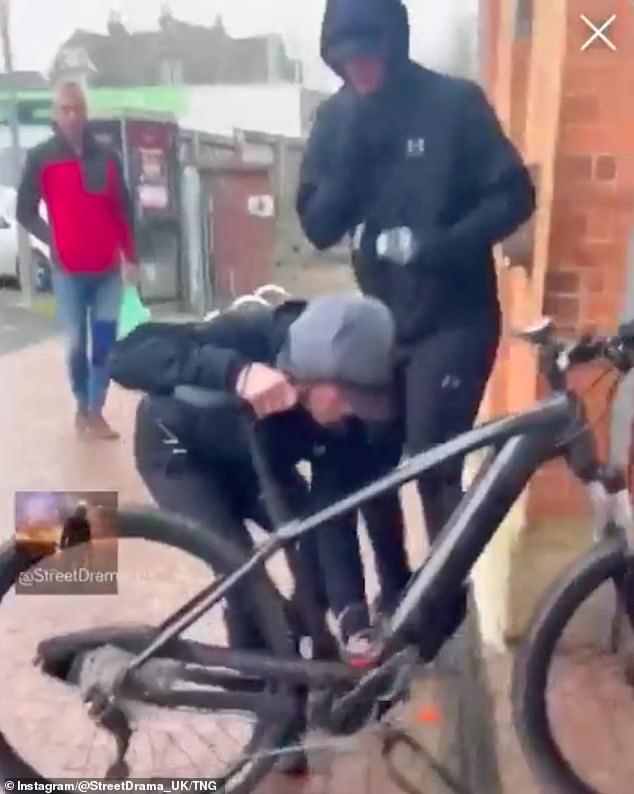 In the footage, taken at Borough Green and Wrotham Station in Borough Green, Kent, the thieves can be seen taking a minute to grind off the chain.

But despite this no one intervenes to stop the three tracksuit-clad thieves from stealing the bike with an angle grinder.

The video received mixed reaction when it was shared online, with some criticising those who did nothing but film the incident.

‘And people are just watching them,’ one person sighed.

Another said: ‘Happy to stand there pointing a phone at them though? Why not just ring the police?’

Another lamented: ‘We have become a nation, expert at filming, I know, it’s good for gathering evidence, but come on, I would step in and do something, I know that they may have knives, etc etc.

‘But it’s not the way I was brought up, I would have to do something, anything, other than film.’

In the footage, taken at Borough Green and Wrotham Station in Borough Green, Kent, the thieves can be seen taking a minute to grind off the chain.

They then try to escape with the bike but the lock gets stuck in its spokes.

One of them tries to ride it but the chain appears to have come off and he ends up running up the hill pushing it.

Meanwhile a bystanders calls the police. Others said that the crooks were ‘not exactly the Krays’.

One said: ‘After cutting the chain they still had trouble getting it off. Not exactly the Krays are they.’

Another added: ‘Hahahaha they actually broke the bike and he ended up running with it. Comedy of errors.

Meanwhile, a third chimed in: ‘So the kids are proficient with an angle grinder but lack the ability to ride a bike. Youth today always amaze me.’

‘Says it all when a substantial chain isn’t a suitable deterrent now. Nothing has much hope against a grinder. Sad times we live in,’ another chimed in.

But one reasoned why no one intervened, saying: ‘People wondering why nobody stopping them, would you risk getting stabbed over someone else’s bike?’ he said.

It is not known exactly when the footage was filmed.