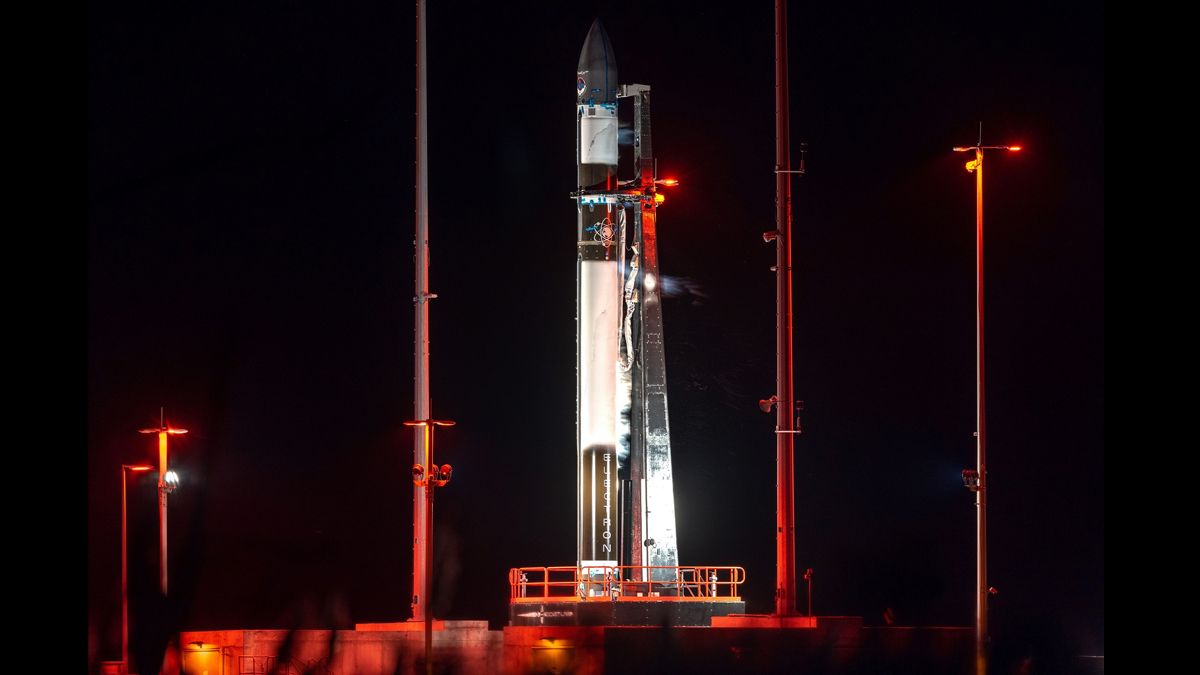 Update for 7:58 pm ET: Rocket Lab has called off tonight’s Electron launch attempt from NASA’s Wallops Flight Facility in Virginia due to high upper-level winds. The next launch attempt will be on Monday, Dec. 19, during a 2-hour window that runs from 6-8 p.m. EST (2300-0100 Dec. 20 GMT).

After years of launching rockets from New Zealand, the commercial space company Rocket Lab is ready for its U.S. launch debut.

The California-based Rocket Lab will launch its first mission from U.S. soil today (Dec. 18) from its new Launch Complex 2 at NASA’s Wallops Flight Facility on Wallops Island, Virginia. The mission, which will use an Electron rocket to launch three HawkEye 360 satellites into orbit, will lift off during a two-hour window that opens at 6 p.m. EST (2300 GMT) and you can watch it live in the window above for free. Rocket Lab will begin its launch webcast about 40 minutes before liftoff.

“Obviously, this is a significant milestone for Rocket Lab,” CEO Peter Beck told reporters in a prelaunch briefing on Dec. 14. “It feels great to be at this point.” Rocket Lab initially aimed for a Dec. 13 launch, but pushed the liftoff back for extra checks, weather and to complete final flight paperwork.

Related: Rocket Lab’s 1st US launch may be visible along East Coast on Dec. 18

Rocket Lab’s 1st U.S. launch could be visible to millions along the East Coast! Here’s where and when to look. If you see it, let us know with photos and comments at spacephotos@space.com!

Sunday’s launch, called “Virginia Is For Launch Lovers” (a play on the state’s tourism motto “Virginia Is For Lovers”), will mark the start of a new age of flexibility for Rocket Lab as it aims to serve launch customers around the world. The company worked with NASA at Wallops, as well as the Mid-Atlantic Regional Spaceport  overseeing commercial launches from Wallops, to develop the new pad.

Until now, Rocket Lab has used its two pads at its Launch Complex 1 on the coast of New Zealand’s Mahia Peninsula to fly missions. A U.S. launch pad will allow the company to launch missions for customers who require a U.S.-based launch, like government or military customers, Beck has said.

Rocket Lab opened its Launch Complex 2 in 2019 and originally planned to launch its first mission from there in 2020. But that first flight was delayed for two years due to holdups in NASA’s development of a new autonomous flight termination system, a safety system required for Electron launches from the Wallops Flight Facility. Rocket Lab is using a version of the NASA autonomous flight termination system, which the company calls Pegasus, for its Electron flights.

David Pierce, NASA’s director of the Wallops Flight Facility, told reporters that errors discovered in the NASA system’s software, and subsequent testing by the space agency, U.S. Space Force and the Federal Aviation Authority, were the reasons for the delay. NASA and the FAA completed their certification of the system before Sunday’s launch attempt, and signed off on final launch paperwork on Saturday (Dec. 17).

“It’s been nothing short of a Herculean effort to get us to this point, which I view as a turning point in launch range operation, not just at Wallops, but across the United States,” Pierce said.

Rocket Lab’s Virginia Is For Launch Lovers mission is the first of three flights for the Virginia-based HawkEye 360 company, which is building a constellation of small satellites for radio frequency surveillance. Under a multi-launch agreement that HawkEye 360 struck in April, Rocket Lab will loft 15 of the small satellites into orbit by 2024.

Rocket Lab eventually aims to launch one Electron mission a month from its Wallops pad. The company is also building a new, larger reusable rocket called Neutron that will also lift off from the U.S. launch site. The first flight of that rocket is expected for no earlier than 2024.

Beck said Rocket Lab’s launch team has already learned from the processing of its first mission at Wallops (rocket components are shipped in a container to the site) and that the basics of preparing a rocket at the new U.S. pad will carry over to the new Neutron program. Rocket Lab is also building a Neutron rocket manufacturing facility in Virginia.

“I think, you know, there’s been a lot of learnings from that,” Beck said. “The next few launches will be significantly more streamlined.”

But for now, he added, Electron needs to ace its first flight.