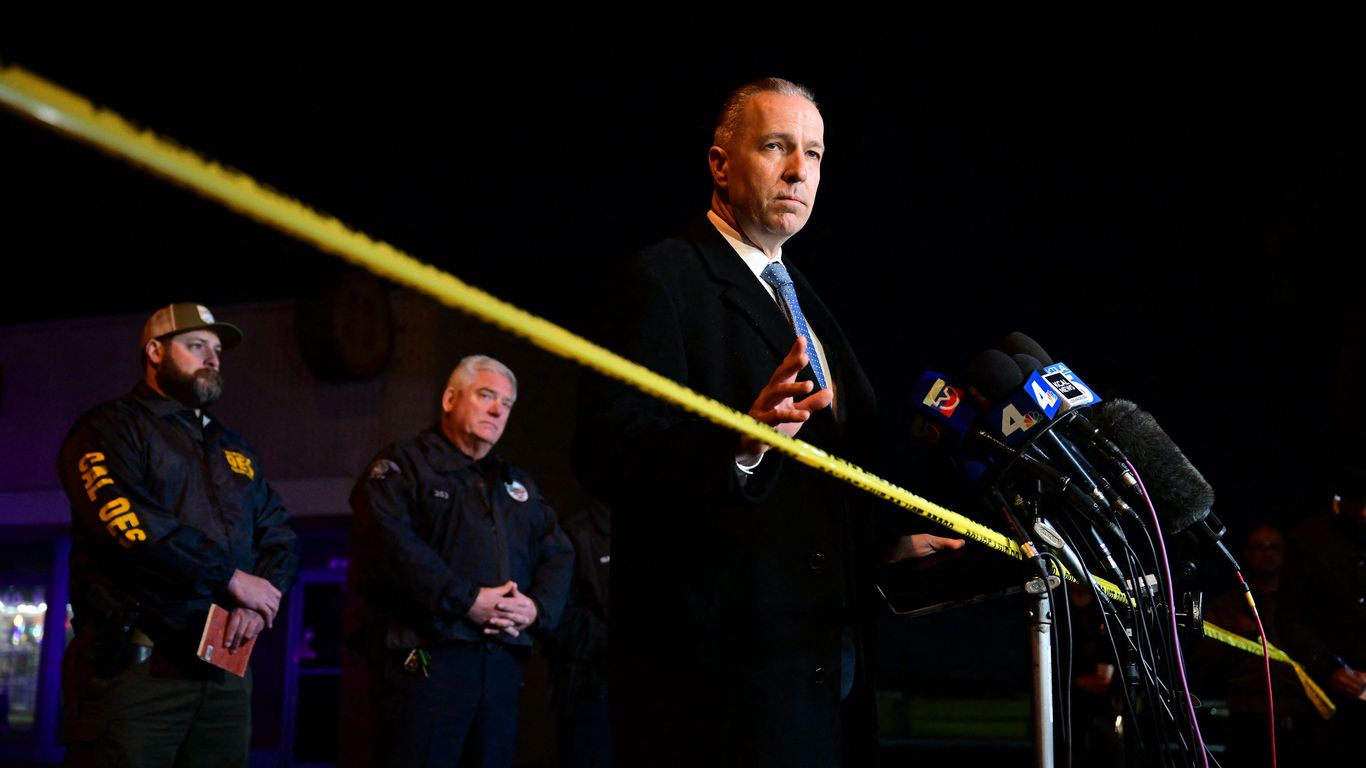 The latest: The Los Angeles County Coroner’s Office on Monday released the names of two of the people killed in the shooting. Eight victims ranging in age from 50s to 70s have yet to be identified.

Los Angeles County Sheriff Robert Luna at a Sunday evening news conference identified the suspect as Huu Can Tran, a 72-year-old man whose body he said was found inside a cargo van with self-inflicted gunshot wounds following a standoff with police in Torrance, California. Police were investigating a motive.

What we’re watching: It’s too early to say whether the suspected shooter knew any of the victims or if the attack was targeted, Meyer said.

State of play: President Biden on Sunday evening ordered the U.S. flag to be flown at half-staff at the White House and other federal buildings until sunset Thursday as “a mark of respect for the victims of the senseless acts of violence,” per a White House statement.

Zoom in: Monterey Park was hosting a two-day Lunar New Year celebration this weekend that’s one of the largest in Southern California, AP notes.

Zoom out: Cities across the country bolstered their security and increased police patrols for Lunar New Year celebrations in the aftermath of the mass shooting, CNN reports.

By the numbers: The Monterey Park tragedy was the 23rd mass shooting in the U.S. this year, per the Gun Violence Archive, which defines a mass shooting as when four or more people have been shot, excluding the shooter.

What they’re saying: “I want to assure the community of Monterey Park and the broader area that we will support you in every way we can,” Biden said. “Even as we continue searching for answers about this attack, we know how deeply this attack has impacted the AAPI community.”

Rep. Judy Chu (D-Calif.) said at the Sunday evening news conference the local community “was in fear thinking that they should not go to any events because there was an active shooter,” but they could now feel safe.

L.A. Mayor Karen Bass tweeted, “Families deserve to celebrate the holidays in peace — mass shootings and gun violence are a plague on our communities.”

Monterey Park Mayor Henry Lo, offering condolences to the shooting victims and their families at a Sunday news conference, said: “It is important that we be there for them, to provide services and support they need in what will be a time of healing in the next weeks, months, if not years.”

Vice President Kamala Harris said at an event Sunday that at a time of a cultural celebration, “yet another community has been torn apart by senseless gun violence” as she paid tribute to those affected by the latest tragedy and added she grieved “for those many people whose lives are forever changed.”

“After a day of celebration, we are waking up to a nightmare… Our community has faced so much tragedy and trauma over the last several years. This tremendous act of violence, on one of the most important days of the year for many Asian Americans, at a place where Asian American families come to gather and celebrate, is sending shockwaves through our community.”

Editor’s note: This article has been updated with additional details throughout.