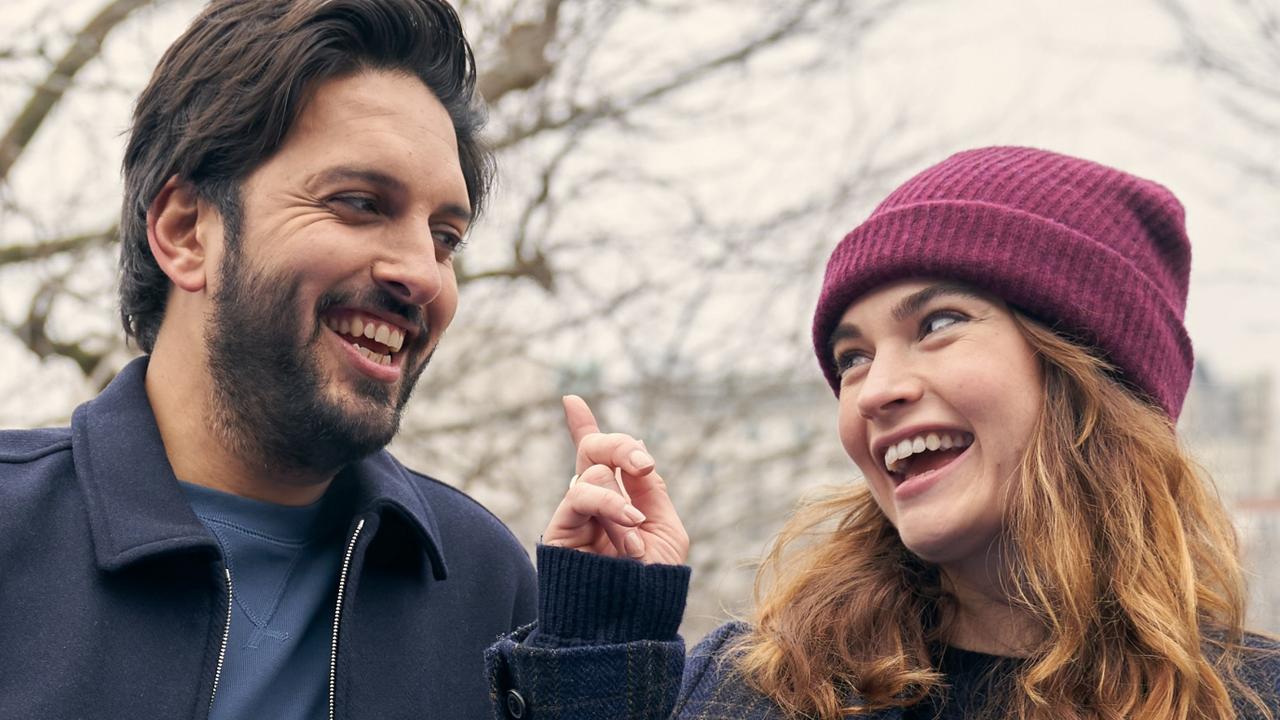 If you had to kiss your best friend, how would you prepare?

For Shazad Latif, who starred opposite his real-life good mate Lily James in What’s Love Got to Do With It, it was a whole pack of mints.

It was still “very awkward” but also “very sweet and very funny”.

“I got through an entire pack beforehand, just to make sure I was fresh,” he told news.com.au. “We just handled it with a lot of care, and we love each other anyway. It was a nice moment.”

What’s Love Got to Do With It is Latif’s first feature lead role in a career that has included supporting parts in the likes of Penny Dreadful, Star Trek Discovery, Toast of London and Spooks. And he’s just spent a year in Australia filming Nautilus, a big budget Disney+ series based on 20,000 Leagues Under the Sea.

He’s even previously worked with James – in The Pursuit of Love – but they shared few scenes.

It was only after he and James were both attached to What’s Love Got to Do With It, did the mates decide to let the filmmakers know, “Oh yeah, by the way, we’re best friends”.

“Me and Lily have been real close friends for years, and when Lily got involved, it sort of kicked it off. And so, I owe Lily James my life.

“We used to be at house parties improvising together, it was fun to do it in a professional sense.”

In What’s Love Got to Do With It, Latif plays Kazim, a successful Pakistani-British doctor who decides to pursue an arranged marriage – or, as it’s known, an “assisted marriage”. The seemingly unorthodox choice prompts his childhood friend, filmmaker Zoe (James), to centre a documentary on Kazim’s journey.

You don’t have to have seen too many rom-coms to know where this story is going.

As is often the case with the genre, it’s not the end but how you get there that matters. And Latif and James have an easy chemistry that comes naturally to two people who have been actual friends for years.

But working with James wasn’t why Latif was attracted to the project. The opportunity to be a part of something which told a story from within his culture. Latif was born in London to a Pakistani father and an English/Scottish mother.

The actor said the film will “demystify” the practice of assisted marriages to audiences who aren’t familiar with it beyond stereotypes.

“There are so many variants of love anyway,” he explained. “We’re just taking a little slice and getting a glimpse into it.

“In England, there’s a history of [assisted marriages], just look at the royals. It’s not just one culture. It’s something that’s all around the world. It’s just that it’s so prevalent in South Asian cultures. It’ll demystify that it’s not a forced marriage, that’s not what we’re dealing with here. It’s parents going, ‘hey, we want to be involved’.

“Sometimes it works, sometimes it doesn’t. It’s the same as dating on Hinge.

“The film is dealing with it in quite a modern way, it doesn’t pigeonhole the process. It’s a rom-com with a lot of heart.”

His dad died when Latif was 23 but he is still very close with that side of his family. Both sides were very excited that Latif was working with Jemima Khan, who wrote the screenplay.

“Weirdly, my mum used to keep a scrapbook of Jemima when I was younger,” he revealed. “So I grew up knowing who she was, because my mum is a white woman who had been to Pakistan. It was Princess Diana and Jemima Khan who were the people she could related to.

“So I felt like Jemima had been in my life for my entire childhood. I told Jemima that in the audition.”

Latif’s uncle is “dying to meet Jemima”, and the dutiful nephew has promised to facilitate a meeting at the film’s premiere.

“Pakistanis are obsessed with Jemima,” he said with clear affection in his voice. “But also Shabana Azmi – my cousin cried when I told her Shabana was in it, because she grew up watching Shabana’s movies. For them, it’s a big thing.

What’s Love Got to Do With It may present as another likeable rom-com but its existence – a mainstream film set within the Pakistani-British diaspora and centred on such a culturally specific story – is revolutionary.

“There’s always a thing of art as activism, but the main thing about that is representation,” Latif said. “For young people, seeing people like you on screen, that’s the main thing we can do.”

The film features two Pakistani weddings and just walking onto that on set, when he heard the drums, made it feel very real to Latif and his own experiences. That and the curries around the family dinner table scene.

“We had about 17 plates with curry. It was just a scene where it was me and my family eating curry and talking. It was so real.

“Anything that can break down a few barriers, it’s opening up space for us and getting a little seat at the table. Any movie that can do that, hopefully people will respond in a nice way.

“It takes a few good years but it has to happen from the top down. We need producers, writers, directors and companies [to get on-board], not just the actors coming through. It has to come from both sides. And I think it’s happening.

“There’s room for everyone, you know?”