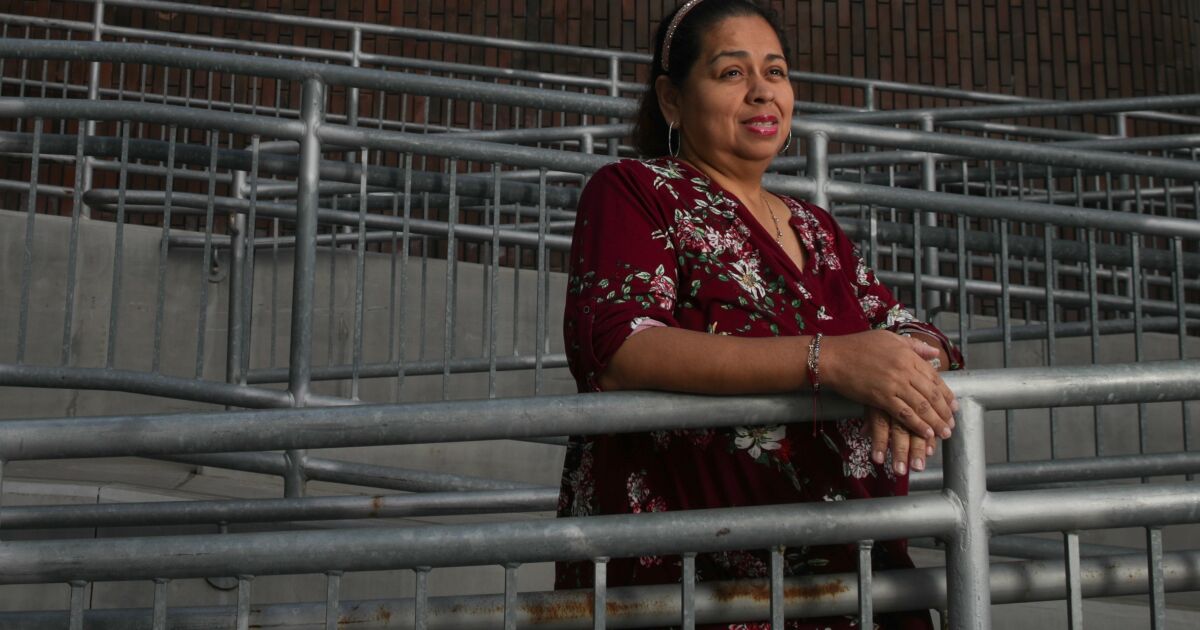 Claudia Chacon said her two children, who attend Fairfax High School, bring home good grades in math and English. But when she reviews their individual scores on California’s statewide tests, she wonders what they are learning. The standardized exams have shown her boys do not meet grade-level standards, making her worry their report cards mask their real achievement levels.

“It feels like they’re still struggling,” she said, concerned that her ninth- and 11th-grade sons aren’t being fully prepared for college.

Their situation is far from unique. After falling in the early semesters of the pandemic, by spring 2022 high school and middle school math and English grades in the Los Angeles Unified School District not only rebounded, but went up, according to an L.A. Times analysis. At the same time, math and English proficiency rates on the state’s standardized tests fell to their lowest levels in five years.

The vast majority of students — whose teachers follow revised grading guidelines put in place amid the pandemic — received A’s, Bs and Cs in their classes. But the good report cards may not reflect a student’s ability to meet California’s grade level standards — even though a district policy calls for a C to mean that a student understands the material.

While grades and standardized tests are distinct ways of measuring how students are doing, the growing disconnect raises questions about whether families are fully informed about the extent of their children’s academic setbacks and whether they are being well positioned to push for additional help.

“My fear is that grades can be a smokescreen for serious holes in knowledge and skill, and that’s not good,” said Robin Lake, director of the research group the Center on Reinventing Public Education. “Smoke will clear. Kids will see eventually that they don’t have what they need if they’ve just been passed forward.”

In L.A. Unified, district officials have struggled to get students to participate in tutoring and to convince parents to get behind its efforts to send their children for additional school days this month.

Meanwhile, educators are sounding the alarm about broad declines in student academic achievement as reflected on state and national assessments. Education Secretary Miguel Cardona has said the nation faces a moment of truth for education in the face of “appalling and unacceptable” declines in achievement. And LAUSD Supt. Alberto Carvalho has repeatedly highlighted his concerns about the academic setbacks.

“Students absolutely demonstrated a loss of academic opportunity as a result of the pandemic,” Carvalho said in an interview. “And anyone who contradicts that is not reading the data, or does not understand the data, or is not advocating what’s in the best interest of students.”

Pandemic hardships led L.A. Unified and other California districts to ease grading requirements as students experienced unprecedented disruption to their lives and education when campuses closed. The most vulnerable students lacked basic resources and support at home to continue learning. When long-existing disparities became starkly evident, educators moved toward “compassionate grading” that did not penalize children for the unfolding crisis.

In spring of 2020, when schools first closed, the district eliminated Fs entirely. The following academic year, which largely unfolded online, the district saw a flood of Ds and Fs — and quickly moved to change grading guidelines, giving students additional time to make up work and retake tests. A D is considered a passing grade for graduation, but college readiness requirements call for a C or better.

Above all, educators wanted students to learn the material and did not want grades to suffer because of difficult pandemic home situations — caring for siblings, COVID-related illnesses, grief, taking on jobs to help support their families.

For the current 2022-23 academic year, the district has continued the pandemic-era policies that make it more difficult for teachers to give failing grades. Teachers are required to document additional opportunities for students to turn in assignments or make-up work.

In spring 2022 the rate of A’s, Bs and Cs awarded in math and English was higher than before the pandemic.

In 11th grade, 81% of students did not meet math standards. The numbers were even more distressing for historically underserved students. For Latinos, 85% of 11th-graders did not meet standards in math. For Black students it was 89%.

Neither grades nor assessments are a perfect measure of whether students can meet the expected standards, education experts said.

California tests are designed to see whether a student is meeting standards adopted by the Department of Education.

By the end of sixth grade, students in math are expected “to be fluent with multi-digit division and calculations with multi-digit decimals.” In 11th grade, they are asked to write expressions in equivalent forms to solve problems.

Educators caution that a standardized test reflects a single point in time. A student might underperform because they were feeling unwell on the day of the test, felt it didn’t matter, were hungry or tired or are not good test takers.

Many experts worry that if schools begin to focus too intently on improving standardized test performance, students will lose out.

“When policy drives such a focus on this testing … it can lead to a dehumanizing of the classroom and in a way limiting what students can learn because everybody is focused on test prep rather than teaching students more holistically,” said Doron Zinger, director of the CalTeach teacher preparation program at UC Irvine.

Grades, meanwhile, have traditionally reflected a variety of factors. Some teachers give points for extra credit. Some grade for punctuality, participation or other variables that may have little to do with whether students understand the material.

Frances Baez, the district’s chief academic officer, said that while receiving a C and above indicates that a student met state standards, “to what degrees depends on the criteria that’s in the classroom that the teacher communicates to the student and the family.”

However, “we do expect them to be related,” said Morgan Polikoff, associate professor of education at USC.

He worries that the awarding of good grades is making families feel less urgency to push for additional support for their children.

Polikoff pointed to recent surveys he and other researchers have conducted, showing low levels of parent interest in learning recovery supports like tutoring and summer school — with parents more likely to show such interest when their children were not earning good grades.

Baez said district officials are aware of the “disconnect” between grades and proficiency on state exams. It is one reason the district is trying to change grading practices.

In addition Carvalho announced this week that he is moving to create a unique study plan and progress report for every student that will provide parents with a clear explanation of how their children are doing in school and outline interventions to improve their achievement. The exact benchmarks — such as which standardized test scores would be included, for example — is still under design, officials said.

A shift in grading

In addition to the immediate steps the district took to reduce failing grades, the pandemic spurred a broader reckoning with the inequities built into traditional grading practices, which have often benefited students with greater resources — families who can pay for tutoring and enrichment courses, for instance.

In L.A. Unified, teachers were directed to base academic grades on how proficient students are in the course standards — rather than marking them down for behavior, work habits and missed deadlines. But only about 3,000 of the district’s nearly 25,000 teachers have been fully trained on implementing equitable grading methods, said Adriana Zuniga, who coordinates equitable grading and instruction for Los Angeles teachers. There are currently waiting lists for teachers who want to be trained.

“We are in a transitional period,” Carvalho said. “Additional ongoing training is a requirement to ensure that under this equitable grading and instruction direction that we’re not sacrificing rigor, nor are we lowering standards. But it is a work in progress.”

“We’re promoting equitable grading practices that are more accurate in communicating what students actually know and what they are able to do and their skill sets, so that we can more specifically personalize the target student needs,” she said.

Without training, teachers may “translate their empathy into inflating grades based on non-academic information,” said Joe Feldman, an educational grading consultant.

For example, he said, a teacher might think: “‘My gosh, this student worked so hard, there’s so many challenges in their lives, so I’m going to give them a little bump.’”

From Feldman’s perspective, empathy is better shown with “responsiveness to their gaps in learning. Not to give them artificial grade bumps.”

Maricruz Sanchez, who has worked on parent advocacy in L.A. County, said she noticed a wide gap early on between her eldest child’s grades and state assessments.

He was consistently earning good grades but failing to meet grade-level standards on state assessments. When she asked his teachers about it, she was reassured that he was doing well. When she asked for extra help, she was told he didn’t need it.

The grades, she believes, were “based on his behavior. He was very polite. And he tried his best. But trying is not the same as mastering the standards and curriculum.”

After years of pushing for extra help, her son was diagnosed in ninth grade with dyslexia, making him eligible for additional support. He is now a freshman in community college and is struggling. It hurts her that he didn’t get help earlier.

“As parents, we want the best for our kids,” she said. “But we don’t always know what best looks like.”