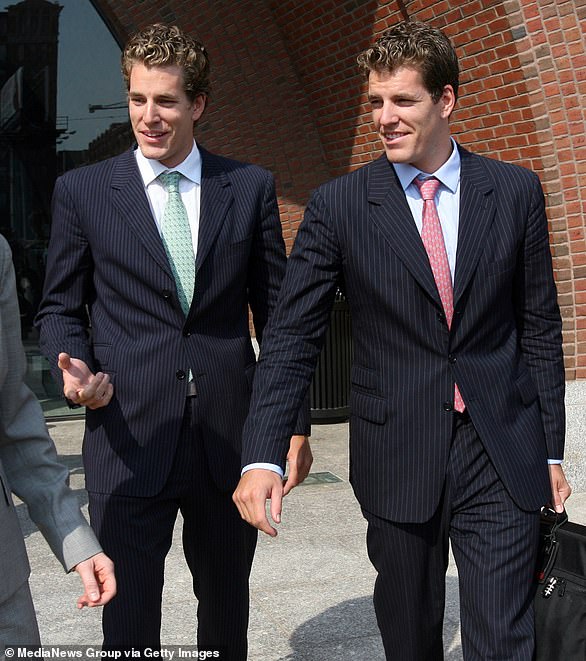 The Winklevoss twins – who are also Olympic rowers – are best known for taking Mark Zuckerberg to court in 2007, claiming he had stolen the idea for Facebook from their website, ConnectU, when they were at Harvard together.

Zuckerberg eventually agreed to a settlement of $20million in cash and $45million in shares to end the ‘rancorous legislation’ dramatized in award-winning film The Social Network.

But he always maintained Facebook didn’t steal the idea. In January 2011 the twins attempted to re-open the deal, claiming it was unfair because Facebook withheld the true value of its shares – even though their settlement at the time was worth $160million.

A third classmate, Divya Narendra, was part of the settlement with the twins, but did not join them in trying to undo the agreement.

In April 2011, the twins’ case was thrown out with the judges stating that they were savvy enough to understand what they were agreeing to when they signed the settlement with Zuckerberg in 2008.

Lawsuit: The Winklevoss twins leaving the US District Court in Boston in 2007, following a court hearing on the lawsuit against Facebook 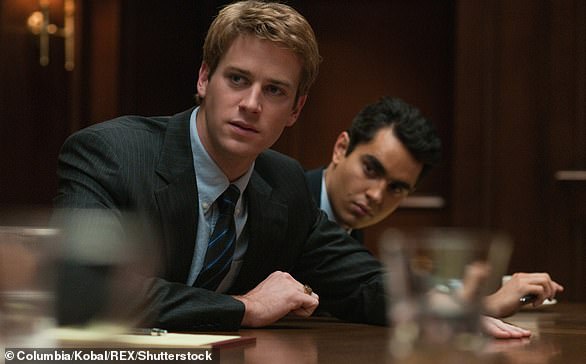 The twins’ legal claims were made famous by The Social Network, in which they were played by one actor, Armie Hammer (pictured above in the role)

The twins got a taste of their own medicine in May 2011 after a Massachusetts judge ruled a software developer could sue them for a slice of their $65million Facebook settlement.

Wayne Chang claimed he was entitled to as much as half the money because he developed peer-to-peer file sharing software for their website, ConnectU – and signed a contract giving him joint ownership.

He alleged the brothers blocked him from receiving the cash he was due. He developed his i2hub file-sharing software at around the same the brothers were working on ConnectU with business partner Divya Narendra – and, at least at the beginning, with Zuckerberg.

In the lawsuit, the developer claimed his 50 per cent share in the Winklevoss Chang Group meant he was entitled to half the $65million settlement – or if not, he was due 15 per cent because of the memorandum of understanding.

After almost a decade of wrangling, a Massachusetts appeals court ruled in April 2019 that Chang wasn’t entitled to any of the $65million collected by the twins. 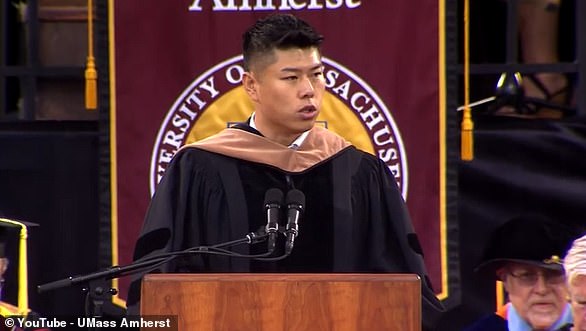 The pair revealed in July 2013 that they owned roughly one per cent of Bitcoins, which equated to about $11million.

Tyler wrote in a blog at the time: ‘Cameron and I contemplate our tickets into space — as seed capital supporting a new technology that may forever change the way we travel.

‘Purchased with a new technology that may forever change the way we transact.’ 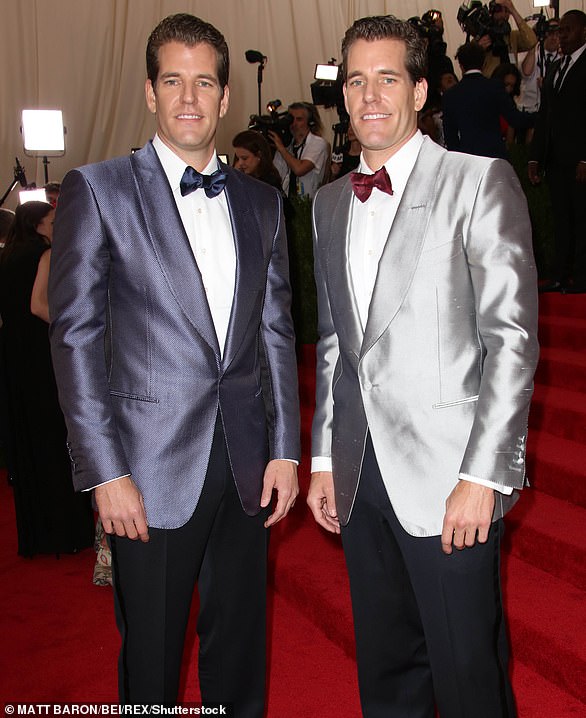 In March 2014, the twins used Bitcoin to buy tickets for Virgin Galactic’s SpaceShipTwo rocket plane – which are valued at $250,000 each

Hukkster, a fashion sale site funded with help from the twins, closed down after almost two and a half years in the summer of 2014.

The twins invested $1million in the startup, which enabled its users to tag items they wanted from online retailers and receive alerts when the items went on sale.

If a purchase was made, Hukkster made a small percentage.

According to LinkedIn, they had 25 employees at the time of their shuttering. 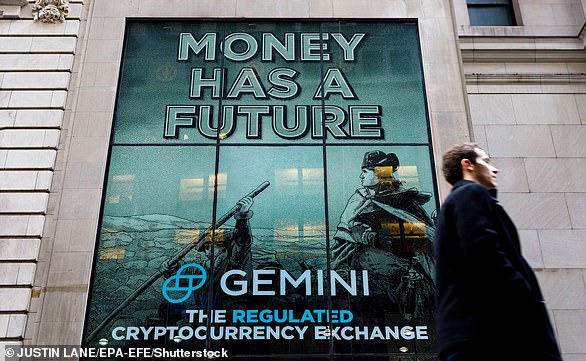 An advertisement for Gemini in 2019

In January 2015, the twins spoke about their hope of making Bitcoin mainstream by creating the first regulated Bitcoin exchange-traded fund in the United States.

They called their project the ‘Nasdaq of Bitcoin’ and they went about hiring engineers from top hedge funds, enlisting a bank and engaging regulators with the aim of opening their own exchange.

In May 2016, New York state approved the application of the Gemini Trust Company to trade digital currency ether on its bitcoin exchange.

At the time Cameron revealed their investment firm, Winklevoss Capital, was a ‘significant’ holder of Ether. 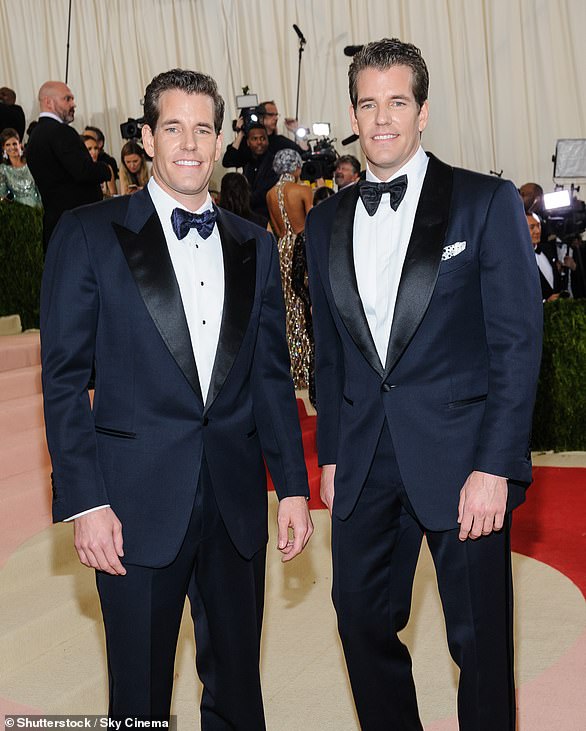 Cameron and Tyler at the 2016 Met Gala, the same year they launched Gemini

In 2017, the Winklevosses became the world’s first Bitcoin billionaires.

They invested early on in Bitcoin and their purchase allowed them to control nearly 1 percent of bitcoins.

It is unclear as to when exactly they invested in the cryptocurrency and the trading fluctuates.

Fortune reported the twins purchased the currency at $120, which would have gotten them roughly 91,666 bitcoins.

The brothers were said to have not sold a single one of their bitcoins, as they watched it soar in value.

Some of the world’s cryptocurrency billionaires saw billions wiped from their fortunes in May 2022 as digital currencies plunged in value over fears for the wider global economy.

The Winklevosses reportedly lost around half of their wealth, down to $2.2billion from about $4.5billion, and they were forced to lay off a whopping 10 per cent of the staff at their startup during this time. 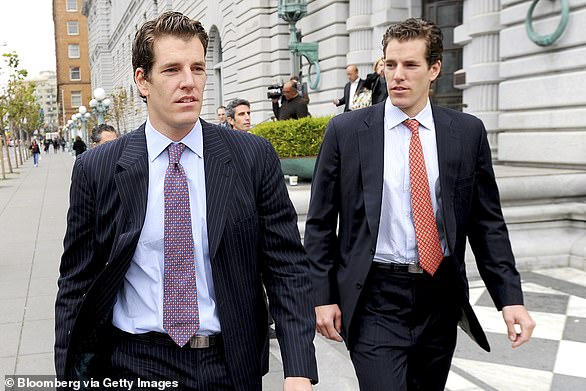 The US CFTC filed a federal lawsuit in New York in June 2022 accusing Gemini Trust Co of making false and misleading statements concerning a bitcoin futures contract the firm was pursuing in 2017.

The agency contended that Gemini violated federal laws governing commodities, and is seeking civil fines and other remedies.

Gemini officials ‘knew or reasonably should have known that the statements and information conveyed or omitted’ by the company were false or misleading with respect to how a proposed bitcoin futures contract could be susceptible to manipulation, according the filing.

‘We have an eight-year track record of asking for permission, not forgiveness, and always doing the right thing. We look forward to definitively proving this in court,’ Gemini said in a statement.

The CFTC filing noted that Gemini’s proposed bitcoin futures contract was particularly significant because it was to be one of the first digital asset futures contracts listed on a designated contract market.

Now the twins are facing further scrutiny with their Gemini dealings amid a lawsuit from the SEC and customers alleging that they were duped by the company when it lent $900 million to Genesis.