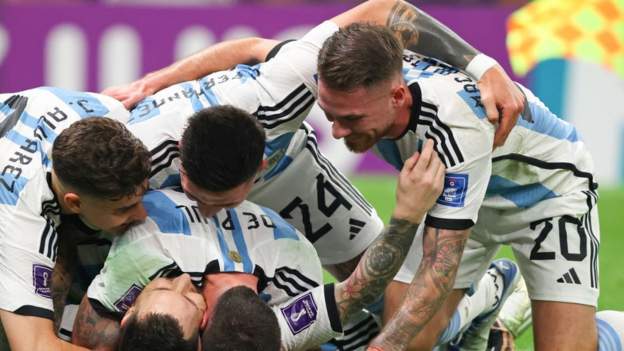 It had everything. Superstars Lionel Messi and Kylian Mbappe going head to head. Dramatic comeback goals. And a nerve-wracking penalty shootout decider.

Social media was sent into meltdown, sports stars around the world were transfixed and those in Lusail Stadium were treated to a mouth-watering showpiece.

“I couldn’t imagine that happening – where you see two great teams going toe to toe and no-one takes a back step,” said Ferdinand on BBC One.

“The two superstars on either team slugging it out, goal for goal…magnificent.”

Argentina manager Lionel Scaloni said he was “calm” afterwards, but could not hide his elation.

“The match was completely insane. I know we had a good match, we could have won in the first 90 minutes,” he said.

“I have the best feelings ever. The most important thing is how we achieved this.”

How a fabulous final unfolded

Much of the focus was on Argentina’s Messi and France’s Mbappe before kick-off as both were level in the race for the Golden Boot and seen as the superstars to lead their teams to glory.

But Mbappe barely had a sniff in the first half as Argentina took just four minutes to have their first shot on target through Alexis Mac Allister, and went on to dismantle the defending champions.

Messi’s first contribution came in the 23rd minute when he scored from the penalty spot to put Argentina ahead and Angel di Maria doubled the advantage 13 minutes later.

France were in disarray, Mbappe had not been in the opposition box and had the fewest touches of any player after half an hour.

Having had enough, manager Didier Deschamps made a double substitution after 41 minutes, hooking Olivier Giroud and Ousmane Dembele and replacing them with Randal Kolo Muani and Marcus Thuram.

At half-time, with no shots on target from France and Argentina cruising at 2-0, reporters around the globe were finalising their match reports – it was surely game over.

But the drama had not even begun.

France were still not at their best when they eventually tested Argentina goalkeeper Emiliano Martinez for the first time after 67 minutes, but the game changed in a pulsating 97-second period that followed…

Muani went down under a challenge from Nicolas Otamendi in the box and Mbappe stepped up to fire a penalty past Martinez.

Argentina had barely got their breath back and France supporters were still celebrating when Mbappe then volleyed in a stunning second to make it 2-2. Extra time, here we go.

But this was Messi’s night – and he thought he had the final say when he poked it over the line, sparking wild celebrations, in the 108th minute.

Mbappe was not done, though. His hat-trick goal arrived in the 118th minute – making him the second man, after England’s Sir Geoff Hurst in 1966, to score three goals in a World Cup final – and a penalty shootout followed.

Argentina, who had lost their lead twice during the match, finally got their hands on the trophy for the first time since 1986, after Martinez had saved Kingsley Coman’s spot-kick and Aurelien Tchouameni sent his effort wide.

Which was the best World Cup final? Vote below

If you are viewing this page on the BBC News app please click here to vote.

How social media reacted to 2022 showpiece